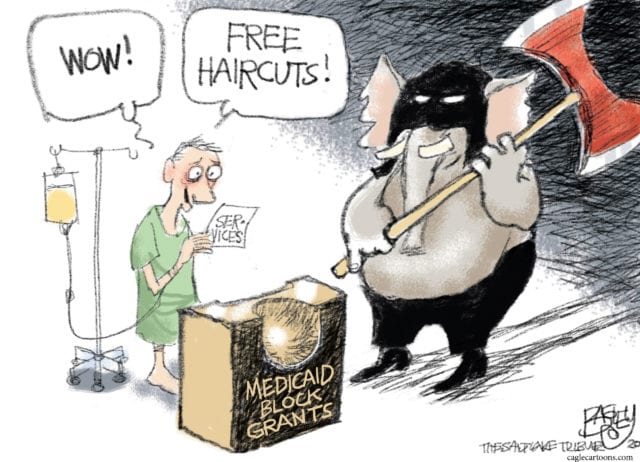 Unhealthy Situation For The Country’s Health

Oklahoma Gov. Kevin Stitt affirmed his loyalties to GOP hate-the-poor policies last week by attending a Washington, DC, dog and pony show with the president to back a plan to endanger the most vulnerable – and least powerful – people in the state and country.

According to NBC News, Putin’s Pal’s Medicaid overhaul would “provide an alternative to red states that want to limit spending on the public insurance option.”

Calling the attack “Healthy Adult Opportunity” – with neither irony or shame – this plan would allow states “to cap the cash they receive from the federal government at a lump sum based on enrollment or a number negotiated with the [Center for Medicare and Medicaid Services].” Because, of course, nothing determines the quality of health care people need quite like their bank accounts.

Oklahomans, who have been paying for Medicaid expansion in other states while getting none, finally said “Enough!” last fall and established an initiative to try to expand basic health services. It will be on the ballot this year. This Republican sham is an attempt to gut its effects.

According to NBC again, “Critics maintain that it could lead to limits on benefits and decreased enrollment numbers for a program that provides health care coverage to 70 million Americans … Detractors further said the guidance allows states to shrink provider payments without permission, limit access to prescription drugs, impose premiums on beneficiaries and impose a number of roadblocks to eligibility.”

The deaths of poor people carry no weight with our public-Christian Republicans. [What did Jesus charge for his healings?]

Last summer the National Bureau of Economic Research estimated that the lack of nationwide Medicaid expansion had resulted in 15,600 deaths. Logic tells us that some of those deaths occurred right here in un-expanded Oklahoma.

Common Dreams reviewed a video for Joe Politics, a British site, this December. “’So if you’re poor, you’re dead,’ one young woman tells the interviewer … after hearing an asthma inhaler in the for-profit U.S. system costs between $250 and $300.”

In late January, Common Dreams reported that, ”Trump Admits – If Re-elected – He Will Seek to Cut Social Security, Medicaid and Medicare.”

Oops. It’s not just the very poor the GOP endangers. They threaten many of their most loyal supporters.

Our wannabe oligarch’s remarks came at the World Economic Forum in Davos, Switzerland.

Richard Fiesta, executive director of the Alliance for Retired Americans, was not in a festive mood.

Common Dreams quoted him: “After a day of hobnobbing with billionaires in Davos, President Trump publicly revealed that cuts to earned Medicare and Social Security benefits will be on the table as soon as the end of this year. The cruel irony of this scene cannot be overstated.”

Of course, if Democrats had not captured the House in 2018, those cuts would already be causing more deaths and health care debts nationwide – to the detriment of many of the people wearing MAGA hats and willingly sacrificing every ounce of their decency to support Greed’s Own Party.

Well, you have to turn somewhere to make up for the money lost to the great GOP tax scam.