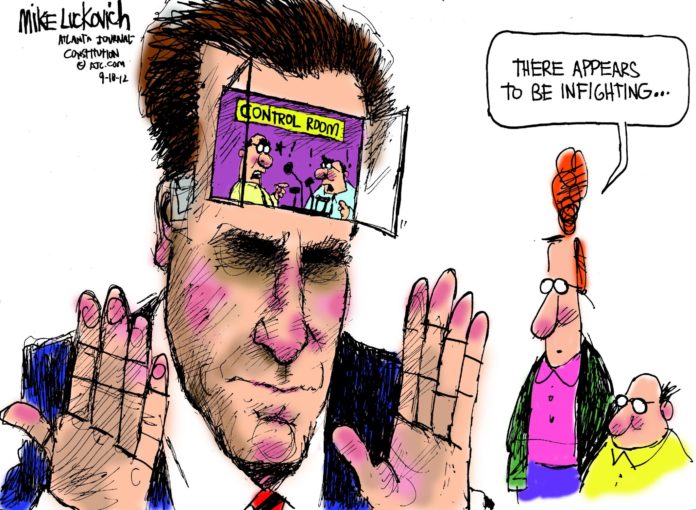 Victims of an economy his party created and continues to create. Victims of a system where we are all victims of the policies of Ayn Rand?

What I don’t understand is why Mitt Romney thinks his constituents in the top 1% of this nation need continued aid and tax cuts without creating anything, but their own wealth.

They call us “elite” so I guess the Tea Party-controlled GOP is now elegant.

We are well aware of what he has to do in his “political process of drawing people into my own campaign.” If he wants us to get more than a “snippet of a question and answer session” then he needs to stop having closed door fund-raising and campaign events. He needs to let us see who his contributors are so we will know who to demand the jobs from.

He is the one who is keeping everything a secret.

One minute he declaring another war and the next minute he is attacking the victims he puts in front of the bullets.

“It’s not elegantly stated, let me put it that way,” Romney said. “I’m speaking off the cuff in response to a question, and I’m sure I can state it more clearly in a more effective way than I did in a setting like that and so I’m sure I’ll point that out as time goes on.”

Stop having settings like that and start coming up with specifics.

Guess what, you don’t get do-overs very often in the oval office.

“It’s a message which I am going to carry and continue to carry,” he said.

Good boy – carry that message back to whatever house you plan to retire in. We work together on this side.

He wouldn’t say if it was his “core convictions” causing him to say this kind of stuff. We know how you got yours and you spend most of your time trying to re-write how you got it.

“My campaign is about helping people take more responsibility and becoming employed again, particularly those who don’t have work,” Romney said. “His whole campaign is based on getting people jobs again, putting people back to work. This is ultimately a question about direction for the country. Do you believe in a government-centered society that provides more and more benefits or do you believe instead in a free enterprise society where people are able to pursue their dreams?”

“Particularly those who don’t have work” – or let’s just call them victims of those who have been getting huge tax cuts since 2001 and haven’t created jobs.

How about those who are the victims of those who make billions from privatizing health care and have to declare bankruptcy when they get sick? How about all of the MS victims who don’t have your six or seven houses and millions, if not billions, socked away overseas?

I think he needs to show us his taxes and then talk about who benefits from government right-offs.

The man is a vulture capitalist. The man borrows money and then loads it onto the company he says he is trying to help and then he skips town with the profits and saddles the company and it’s employees with his loans.

Our foreign allies had better be prepared if this guy wins because we will be at war within minutes because he pops off more than a 14-year-old with an attitude.

He leads a secret team of victims of their own greed.