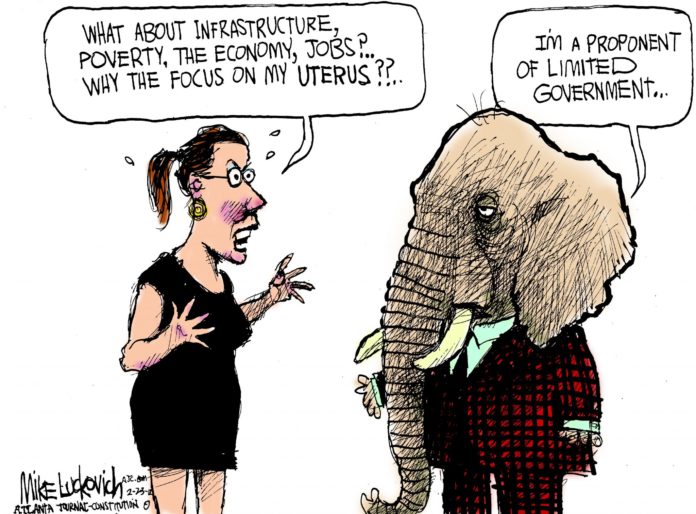 Be prepared. The GOP is going full force after the right to vote of anyone who doesn’t have a photo ID whether you are a senior who can’t drive anymore or a person who can’t afford a car or chooses not to drive. It is a return of the poll tax. They are after the Democratic base.

By now, if you have a vagina and have not gotten the message that your uterus is the primary plank in the GOP platform then you are not paying enough attention. They do not allow women who want to protect their private parts from the GOP idea of small government to speak in committee.

By small they mean a government small enough to fit in your bedroom [straight or gay bedroom] and even small enough to look over the shoulder in your OB-GYN examining room.

They want to give citizenship to your egg as soon as the their sperm or anyone else’s sperm – including the sperm of rapists and incestuous relatives – hit it. Personhood amendments include phrases giving equal parental rights to either natural parent, even if it was a very unnatural act that made either party a potential parent.

In Virginia you don’t have to look at the ultrasound, but in Oklahoma you must be positioned where you can see the monitor or at least listen to a description of the fetus.

In Virginia they have to make a record that you didn’t look – I guess so they can make sure the entire Virginia Legislature can look. I got news for you: at conception it is really difficult to tell a human zygote from the zygote of any mammal unless you are trained to do so.

OK, if this primary season hasn’t made your mind up that the GOP doesn’t care about your rights and would like to make all of us Catholics or at least let the Pope make all of our personal decisions, then you have already agreed to submitting to anyone without a vagina regardless of whether it is your husband or Newt. What the hell are marital vows, anyway, Gingrich?

If women vote against anything GOP this go around, expect the GOP to put women’s suffrage on the plank in the 2014 congressional elections and the 2016 presidential elections. They have no proof there is more than just a smattering of Election Day voter fraud, but they don’t care. If you don’t vote GOP then you should not be allowed to vote.

Do not think I have given up on gay rights. They keep bringing up Hitler and he did come for and imprisoned gays in Germany and very few people cared. He also came for vaginas and even small girls had to submit. People would have cared had they known.

Come on, girls. Susan B. Anthony and Elizabeth Cady Stanton should be haunting your dreams. Alice Paul and the 218 who were arrested – many of whom went on hunger strikes for your right to vote – should be giving you nightmares. They never broke a law. They weren’t arrested for blocking traffic and they kept increasing the sentences; they were arrested for insisting on the right to vote. Some got 90 days.

If you have a vagina and you choose not to vote, no matter what reason, do not tell me. If you can’t see a significant, in not glaring difference in the two sides, then you are actually too ignorant of the issues and what I might say the Virginia governor would not want being sent via e-mail from Virginia.