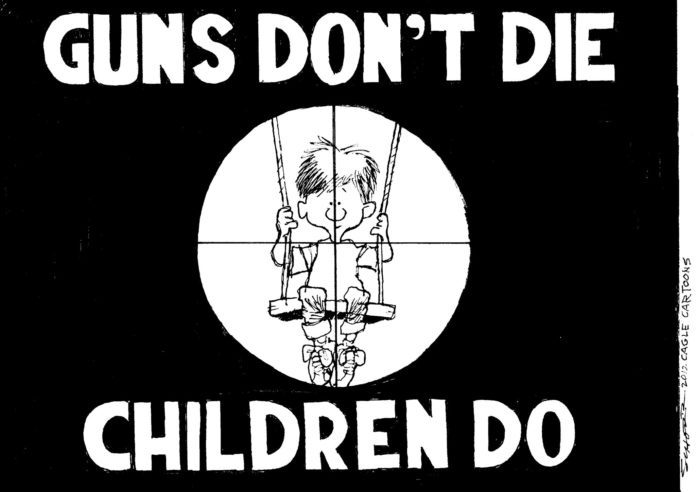 We Are Your Constituency, Not The NRA

Yes, I heard/read the “response” by Wayne LaPierre of the National Rifle Association. No one who has been paying attention should be surprised at the usual meme coming from someone who has never served in combat and knows almost nothing about the psychological impact of guns in schools. This “spokesperson” is beholden only to the gun manufacturers and sellers. What else would we expect? Guns are good for business and business is good.

When people’s live become too complex for their normal abilities to deal with them, they revert to “beliefs” that give them the simple comforts of their limited intelligence or even more limited desire to actually solve problems. Having worked as an educator in a variety of rural and urban schools I can tell you first hand that inviting more guns onto a campus or school building guarantees that more people will die during any incident including an angry student disarming a teacher and blasting away.

What Mr. LaPierre and the rest of the pro-gun community don’t understand is that our society is violent by its very nature and history. Ultimately, the spread of violence threatens the very fabric of our society. See: Rome, The Fall of … to recall what constant war and civil violence did for that society.

What if, for example, the rest of the world’s tourists decided to boycott visiting the United States because they deemed it too dangerous? How will more guns on the streets and in the schools solve that problem? How many empty hotel rooms will it take to get the attention of those supposedly governing this nation?

Where are the statistics that show how many “bad guys” have been thwarted because a “good guy” had a gun during a crime being committed by the “bad guy”? Why didn’t Mr. LaPierre offer those numbers? I think it’s because the incidents are so few as to render them statistically invalid compared to the mass shootings that occur so often.

The United States reports over 10,000 to 15,000 deaths by gun every year. This exceeds those in all the other nations we consider to be part of the civilized world by seven [7] times! Does this mean we are the least civilized of nations?

Coincidentally, we are the only nation that has such free access to guns. When Australia banned assault weapons mass shootings went to zero [0]. When we banned assault weapons, mass shootings dropped to almost zero. When the ban “expired” the mass shootings went right back up and even exceeded previous levels. I guess there was much suppressed killing that needed doing by our peace loving nation. How can we allow an anti-mass murder law expire? Was that Congress’s sop to the gun lobby? Shame on you if it was.

The NRA and its fellow gun industry lobbyists serve only their masters who pay them. Those of you in government know how that works. When they threaten you, the lawmakers that We the People elected to serve, they are committing crimes against the government … to say nothing of the people. You can find your generous contributions elsewhere than from the manufacturers of death instruments.

The polls have shown that you, the politicians, have the power of us, the people, to do the right thing. Plead your case and let the NRA try to shame you or intimidate you out of office. We’ve got your back – if you do the right thing by us.

The lives of our children and our innocent depend on your action. We the people are not going to just stand around and be targets for gun-wielding fools who think they know the difference between good and bad when the bullets are flying.

We the People do not want assault rifles in our midst. We do not want our children subjected to evermore themes of continuous combat and war.

You are charged to save our nation from the intellectual dwarfs like Wayne LaPierre. He and his ilk are the whores of the gun and para-military magazine industry selling false manhood to dangerous people. They should not make you afraid, because when you are afraid of them, you have allowed the promotion of irresponsible killing to claim victory.

The Constitution requires that you protect the innocent from the violence of the fools and the few who lose their senses. Do your duty or we will vote in someone who will – someone who isn’t afraid or beholden to the gun industry or some misguided fear monger like Wayne LaPierre.

We are your constituency, not the NRA. Serve us, not them.