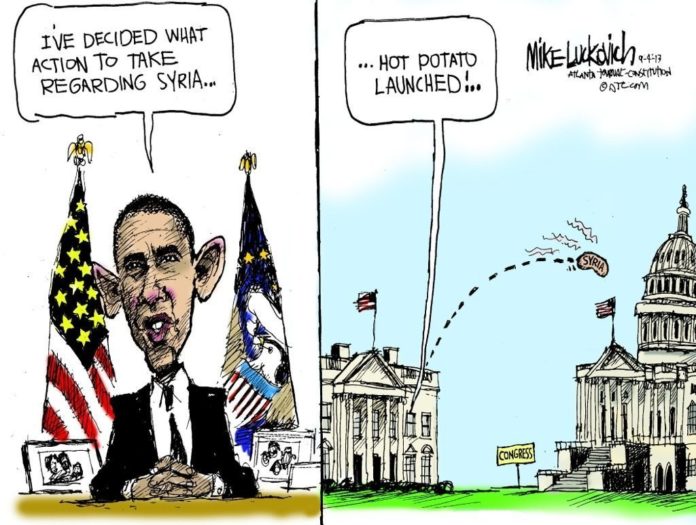 ‘We Need To Get This One Right’

It seems increasingly likely that the United States is going to make a military strike against Syria. Personally, I can’t figure out which side of the fence I’m on.

Certainly the actions of the Syrian government are an outrage to humanity, and the citizens are defenseless against a tyrant that would make a chemical attack on citizens. If their leaders are so morally bankrupt they can do that to their own people, it’s not a stretch to consider they’d be willing to place those weapons in the hands of terrorists with designs on America.

On the other side, I’m weary of wars. The financial cost is significant, but the real price is paid by our military and to the image we project to the rest of the world.

There will never be a shortage of oppressive tyrants in power around the world. Like cockroaches, we can eliminate one and another pops up instantaneously. That’s the way it’s been since the beginning of time, and likely will continue until we finally destroy our planet and all civilization.

In considering an appropriate response to the actions of the Syrian regime, the president chose a prudent path in seeking a debate on the issue, and a consensus support for our way forward. If we’re going to launch an attack, or chose to sit this one out, it needs to be a decision and responsibility shared by all our elected leaders. That means both Democrats and Republicans. This isn’t a political issue, it’s about our role in the world and how we should approach this situation as the most powerful nation on the planet.

It’s not likely that the UN will reach an accord. Russia, the principal supplier of weapons to Syria, holds a veto power and is prepared to use it. Other allies, like Great Britain, have made it clear they’re not getting involved. If our decision is to intervene, we’re going to be going it alone. That’s another factor for our leaders to consider.

There seems to be a growing consensus of support for taking action. On Monday, following a meeting at the White House, John McCain and his ever present pal lLindsey Graham said they support an attack. On Tuesday, Speaker of the House John Boehner, and House Majority Leader Eric Cantor said they both support taking action. House Minority Leader, Nancy Pelosi also announced her support today for taking action. She added the comment that the president should lay out more of the evidence against Assad to help build the case for action.

We were rushed into the Iraq war, and found out later the basis for launching it was bogus. An open –and public — debate on our response to Syria’s actions is warranted, and essential, not just to get authority to attack, but to present the verifiable evidence to justify it, and give ownership to the ultimate decision to all of us, and all our elected officials in Washington.

We need to get this one right.

— Kenny Belford lives in Tulsa, OK and is a regular contributor to The Oklahoma Observer