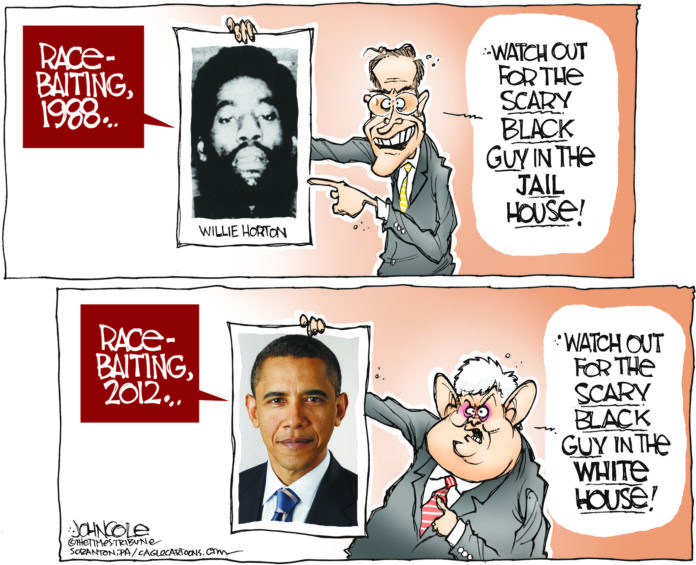 What Color Are Words?

It has been interesting to watch the Republican candidates go at each other using the native tongue of the South to inflict injury. The manner of speaking that does not come straight out and use explicitly racially charged words, but rather uses hidden meaning terms. Terms like “food stamps,” “Nanny State,” “Put him in his place,” and the list can go on.

What intrigues and saddens me is that often the regular Joe or Jane on the street has not a clue as to where the terms come from. We hear words being used on a daily basis and never pause to wonder.

A term that I have used is a single word “boy” as in “Hey, boy, come here” or “Boy, what are you thinking?” It wasn’t until a black man stopped me mid-sentence and said, “I ain’t your boy,” that I realized some commonly used words carry way more hurt and injury than I had taken note of.

He was right. He was not my “boy.” And I did not intend to convey that meaning – nevertheless, that was what he heard. In that specific instance an apology was extended.

I hear the term “Nanny State” used to refer to our current system of social welfare and governance. Some that I’ve asked about the term say it means something like babysitter or refers to a position held by someone paid to care for a family’s children. That is part of the answer.

There is, however, another part. Nanny, as a term, can be traced back to the Southern practice of having a servant [slave] look after and care for the family’s brood.

It was also applicable to the wealthy of both north and south that would “hire” a “nurse” to care for their children. The title “nurse” carried with it greater kindness and prestige than “nanny” and many wealthy families chose the title in order to appear less involved with having a servant.

Language can also say much about the user. “Well, I didn’t mean it to be racist but I will not be told what I can or cannot say!” Not a problem with this exception. To be calloused as to the sensitivities of members of the human race, deserving or not, is to paint a not so complimentary portrait of oneself.

“Well, I certainly put him in his place” What place would that be? In its original meaning that place would be several levels in societal acceptance below you. It was a way of saying “I handled that uppity n—–.”

It is used today, as it has always been, as a way of approving the denigration of another human being. “He got his comeuppance” falls into the same style of speaking.

You might fairly ask, “What is the point of this?”

My point is that we too carelessly throw words about – sometimes knowing full well the injury they can cause and with that intent. Other times we mindlessly and thoughtlessly say what spills into our mouths with not a moment’s pause – because we’ve become accustomed to it.

Modern terms intended to denigrate are things like “food stamp president” or obvious references to ethnic characteristic. We are not long past Martin Luther King Jr. celebrations and the shadow of racism remains with us. To deny it is to admit it.

Up to this point I’ve assumed the innocence of the individuals who use words that hurt. What is more distressing are those who both know and intend their words to be injurious. This is not about being politically correct; it is about being civil and reasonable in our discourse.

There was a time when great orators painted word pictures that could expand the imaginations of their listeners. A time when the oratory was thoughtful and structured.

Today, we have devolved to a point when all it takes to create a sensation is for a mouth to open and some foul smelling, vitriolic, purification to spill out. The gift of the orator has long since ceased to be the rule. There is one political person that still has the gift; he is an exception.

The ability to speak – clearly, meaningfully and understandably – is challenging. But it can be learned. To continue to pander to the folksy and common is to allow our standards to diminish. As character goes so goes education.

The greatness of this nation did not come about by accident. It was built through sacrifice and struggle, informed by the education of the people. My mother used to chastise me whenever I spoke using “slang.” It was, she thought, the language of the lazy and less educated. She was a grand lady, born into a working class family that instilled in each child a desire to better themselves.

As we bemoan the shrinking of the working class, let us not forget that education has always been the path to understanding and creativity.

It is a choice we make. We have the ability to create a better world or to utterly destroy it. What comes from the mouth cannot return. Let what you say be positive, for it does make a difference.

– Don Nelson lives in Lawton, OK and is an occasional contributor to The Oklahoma Observer