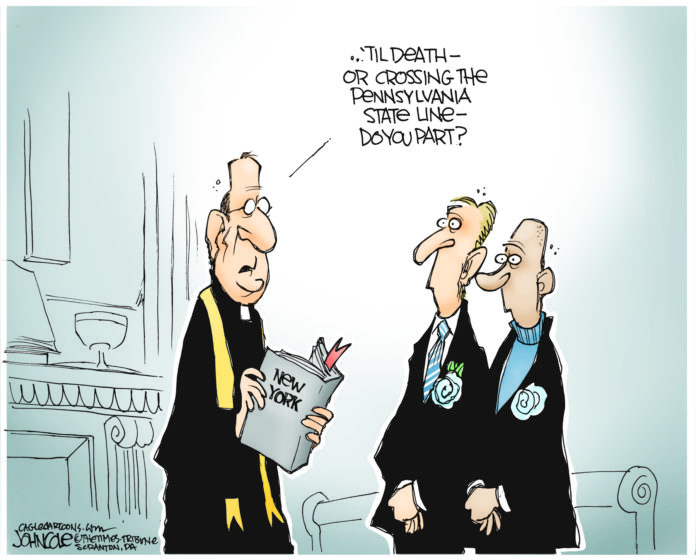 When Jesus Plays The Bagpipes

Gazing into a crystal ball my prediction for same-gender marriage is that the United States Supreme Court [SCOTUS] will not accept any appeal from the lower courts.

This will have the consequence of leaving same-gender marriage to the individual states to do what they will, using the state legislatures to pass bills, pass the question on to public votes, or let lower court rulings decide the hot-button issue state-by-state.

We gays and lesbians are hated even more than people of “color” were in the 1950s and ‘60s.

Some people of “color” deny there is any connection at all with their “immutable” equality movement and ours where we “decide” on a daily basis whether to be gay or straight.

On the other track, the Defense of Marriage Act might be overturned should Obama get re-elected, but SCOTUS can legitimately deny any appeal by using the tactic that since marriage laws have always been the prerogative of the states there is no place for a Federal court ruling requiring states to conform to a national marriage law.

The patchwork system of some states recognizing the existing yet un-recognized civil right to marriage for any two qualified adults will continue for another generation.

This is our Plessy v. Ferguson interregnum where SCOTUS ruled in 1896 that separate WAS equal. This attitude was legal until overturned by the Brown v. Board of Education decision of 1956 and instituted integration in public facilities.

Perhaps in the 2050s we’ll get the legal recognition that is morally ours already, but I won’t be here to see it.

The entire history of America, in a nutshell, has been denial of legal recognition to minorities – it’s evident in the original Constitution: women were not mentioned at all, slaves and Native Americans were counted as three-fifths of a person, the states were allowed to pass laws requiring minimal ownership of property to allow only some men the right to vote, poll taxes and literacy tests were allowed to keep minorities from voting.

The latest trend to oppress minority demographics is to require state-issued ID cards for all voters, ostensibly to reduce non-existent “voter fraud,” disregarding the time and expense that will result in dis-enfranchisement of the voter – this burden falls mainly on minorities who pay for responsibility through their taxes, yet receive little of the accompanying privileges.

There is little reason to expect our own gay/lesbian equality fight to be met with any less resistance from the status quo that calls the shots behind the scenes.

Chest-beating America is far from being a leading Democracy of the world – its an equal-opportunity denier.

The real history of America is one of some people not willing to share the public pie, wanting it all for themselves. Are civil rights diminished when shared? Is there a limited supply?

Some activists and politicians who try to defuse issues or salve the wound appeal to our collective “better nature.” I think the true nature of America is one of contentiousness and self-promotion.

No European or Latin American country that recognizes same-gender marriage has put the question to a vote of the people. What more need I say? America is a country of bully-boasting braggadocio supported by diluted education, exaggerated by the delusion of religious superiority.

We’ll get true equality in America when Jesus comes back to play the bagpipes.