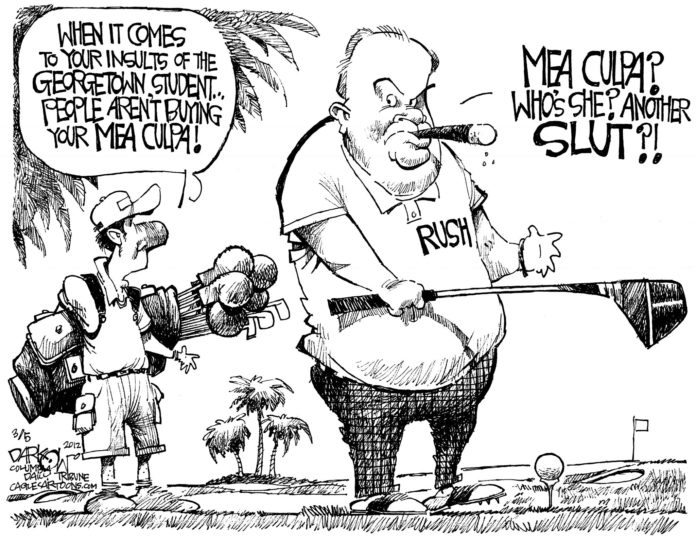 Where Rush Can Put His Cigar

There is a moral outrage that swells in one when something akin to Rush Limbaugh can take to the national airwaves to insult a young woman, Georgetown University law student Sandra Fluke, with name calling and demeaning remarks about her private life of which he had no knowledge.

It is similarly outrageous that his conservative minions would cower in the socio-political corner and allow his behavior to go unchecked.

Limbaugh has a First Amendment right to speak his mind. And I have mine.

I have a daughter. I am very proud of her. She has a degree in International Business, is fluent in French and holds several Securities and Exchange Commission licenses.

She supports herself and pays her bills. She is single, lives alone and has an active life.

She is not unlike Ms. Fluke. What she does in her own time is none of my business. She agrees with Ms. Fluke with the issue at hand, payment support for birth control.

But for Limbaugh, whom I have long considered a misshapen piece of social junk, to suggest that young women, or women in general, who disagree with him are of low moral character is an insult not only to Ms. Fluke but also to the mothers, wives and daughters of this and any other country.

It is also an insult to the parents and loved ones who hold these women dear.

The rage does not end with the vile mutterings of a shoe salesman who found his way into the dark elements of a conservative movement without a soul or compassion. One can only wonder what followers of Limbaugh told their wives, mothers and daughters.

There is rage against Republican politicians who, with unbridled cowardice, pander to Limbaugh. It did not go unnoticed that the MEN running for president were slow to react. And did so with caution.

It would be easy to believe they were willing to sacrifice the dignity of the women in their lives for fear of Limbaugh.

They want to run a country? It appears they made their cautionary statements only because the public knew what they did not – Limbaugh is insulting by his very nature.

Limbaugh’s behavior is indicative of this entire campaign cycle. Candidates and pundits make statements, truth and fact need not apply. Such statements are retracted only when and if there is a backlash. If a backlash occurs, then the statement gets glossed over as a misunderstanding, poor choice of words or misinterpretation by the listener.

Limbaugh has attempted to portray his remarks as a poor choice of words, an attempt at humor. Where is the humor in “slut” and “prostitute” when referring to someone with an opposing political view?

If “slut” is so funny, try it out on Mrs. Santorum, Mrs. Gingrich, Mrs. Romney and Mrs. Paul then look under Dentist in the Yellow Pages.

Public figures no longer have the luxury of claiming they were misquoted. iPhones, camcorders and streaming have relegated “misquoted” to the political dust bin. Limbaugh certainly was not misquoted; the whole world heard him.

And then there is the electronic media that provides Limbaugh the platform to insult our population without flinching.

Do they fear that to censure Limbaugh would lessen their place in media heaven and lower their ratings, depriving them of the filthy lucre they derive from his ranting, unfounded innuendos and misstatements?

When did sex, affection and love in America become something for public discourse by a Limbaugh?

We are besieged with legislation to allow the government to peer into the most private aspects of every life – and a woman’s life in particular. This is being done by malefactors claiming to want the “government” out of our lives, unless you’re unemployed, of color, non-Christian and/or female.

The American public must say “enough.”

The times we live in are too serious, the problems too large and the missteps too dangerous to be governed by the likes of a Limbaugh. Republicans must shed Limbaugh like a snake skin.

Limbaugh’s remarks were insulting on a national scale. His apology rings hollow considering all that he has said in the past about people with whom he disagrees.

Limbaugh can say what he wants – it is his right. But there is no amendment saying the public must listen.

I have a daughter and I am enraged that Limbaugh almost got away with his attack on Ms. Fluke. Were it not for the Internet media, he may well have succeeded.

In the bowels of political decadence there are places for Rush Limbaugh. In the public arena, there is definitely a place for his cigar.