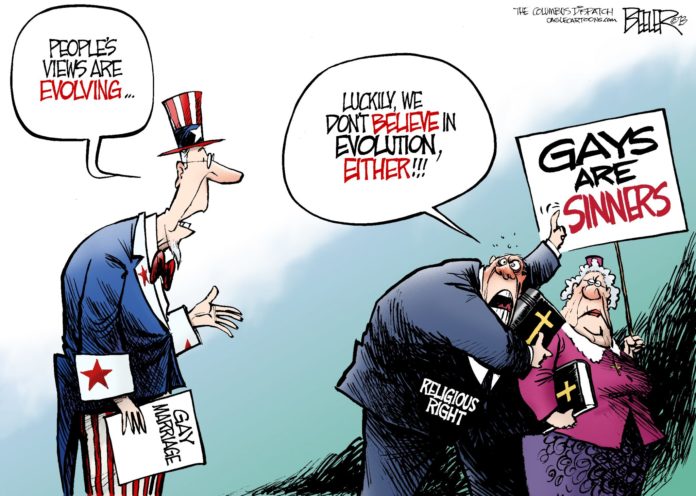 What I see coming from the Southern Baptist pastor’s conference isn’t even a quarter turn and barely even a glance to the left.

Kevin Smith of Kentucky said, “If you spent 20 years and you’ve never said anything about divorce in the church culture, then shut up about gay marriage.”

First, where did he find a Southern Baptist preacher who hasn’t said anything about divorce in 20 years? When I read what he said, the first thing that came to my mind after listening to thousands upon thousands of Southern Baptist sermons was, “This guy thinks there needs to be some cracking down on divorced people.”

When I was growing up, most SBC preachers I knew wouldn’t perform a wedding for someone who had been divorced – however, they didn’t usually force them to go back to the person they hated before baptism.

I personally know one preacher who wouldn’t perform a marriage even after the couple had twins and even if the reason for the woman’s divorce had to do with years of abuse.

Preachers did create a lot of the reasons for divorce by constantly preaching that a girl had to marry a guy she had sex with or she would never be able to find a husband, even if she wasn’t pregnant. If she was pregnant then the marriage was mandatory, even if the couple couldn’t stand the sight of each other or she was sent off to Kansas for nine months of verbal and psychological abuse from the likes of Lester “Get a spinner for your Monopoly game because dice are tools of the devil” Roloff.

Pastor Jimmy Scroggins of Florida says that “officially, Southern Baptists aren’t backing down front their belief that homosexuality is sinful.” I have gotten protests from some of my gay friends because I don’t actually care what they say is sinful because as long as they don’t want to put their religious beliefs into law or incite people to anti-gay violence, I just don’t care. Laws like commanding women to wear their hair down to their ankles and clothing just short of a burka and suffer heat stroke as proof of devotion. Or the idea that rebellious children should be stoned or that men had to marry their dead brother’s wives and vice versa. Or telling people which consenting adults they can marry and which they can’t.

However, considering the Bible, as I interpret it – which is as good as anyone else’s interpretation, even the Pope’s – the good book doesn’t allow anyone to judge anyone else’s sin.

If there is a judgment day, then I guess I will have to sort that out at the time.

Say what? Interesting. What about all of those who are already members who are still lying on their tax forms, gluttonizing at every church dinner and making it possible for the entire church to gluttonize, really gluttonize, five or six large tables to gluttonize on? You can add all those who are bearing false witness before the beginning of nearly every Sunday school class I was ever in or revealing confidences they shouldn’t. What about self-righteous filthy rags?

I keep telling people that we, here in Moore, OK, the tornado capital of the universe, do not have that big of a gay community. If God is coming after Moore because of sin, it just has to be self-righteousness.

Apparently Brother Scroggins is repenting from indulging in the sin of anti-gay humor. I once had a pastor who used terms like “fat-faced daughters, wall-eyed sons and hairy-legged deacons.” He thought those were funny.

Making gays the “butt” of jokes is what he calls “redneck theology.” Is he serious? Redneck theology is the norm in the south. Let’s be compassionate, right?

I had a dear friend, as a teenager, who was forced, as an adult, to leave the church we spent our youth in because someone decided he was gay because he had never married. I have no idea whether he is or not, but he never came out to me or anyone else.

Richard Land, the idiot that used to speak for the SBC still says gays are the result of being molested as children. I don’t think that causes homosexuality, but it is disgusting. Now he is calling activists a “lynch mob.”

The new guy, Russell Moore, says that those being outrageous against gays are just “losers” and are now in the minority. I think he means minority regarding voting blocks, because the church is still against gay rights.

“We’re living in a different time, where we have to learn how to understand what’s going on in the world around us,” he says.

Yeah, it is just like back when the Southern Baptists split from others because they thought slavery was from God. Justin Lee of the Gay Christian Network thinks this is a step in the right direction. Oh goody, it means that it will be a nicer, more Christian form of homophobia.

Here is the real kicker, the quote I particularly am amused at: Janet Mefferd, a radio host in Dallas, says: “You see more pastors caving and muddling and getting more and more mealy mouthed about the issue, and ‘Oh, let’s have a dialogue. Let’s have a conversation.’ It is a time of rapid loss of courage.”

I think Janet is just completely ignoring the Biblical warning about women in the counsels of men. I just love to hear a devout believer in submissive behavior come out with a real upper cut. You submit right up until you just can’t help yourself and then you grab a flaming torch and start burning gays at the stake.

Southern Baptists still aren’t ordaining women as deacons or preachers and usually kick churches out to the convention if they do. Janet is not pastor’s wife material, unless she is in Oklahoma and wants Rep. Sally Kern’s seat.

The crux of the problem is, even if the entire convention becomes friends of “Dorothy’s friends” and do five choruses of “People Who Need People” with Barb or march down main street with Sister Sledge, they will still be voting people into office that seem to hate women, gays and the poor, especially the working poor without a living wage or health care.

People who think grade school children should have to mop the cafeteria for food. People who think wearing a pair of Nikes makes you automatically unqualified for any kind of aid – even if you are a child leaving war-torn Bosnia or if the Nikes were a gift.

All you have to do is listen to the people running in the GOP primary in Oklahoma. These people treat “the least of these” like Jesus is some kind of a lazy, welfare grubbing communist – which is what they would call a guy who didn’t marry, took care of the poor and hung out with 12 guys. Make that a gay communist.

One guy running for the nomination for U.S. Sen. Tom Coburn’s seat stood by his wife through breast cancer, but the working poor do not deserve a living wage or health care. His favorite sound bite, now, is “freedom doesn’t come from the Constitution it comes from almighty God.” He is an African American backed by the Tea Party.

Another leading candidate is concerned that if we take care of the poor now, his grandchildren will have to pay for it because if he trains them up in the way he wants them to go, he wants to make sure none of what they inherit from him goes to help “the least of these” now or in the future.