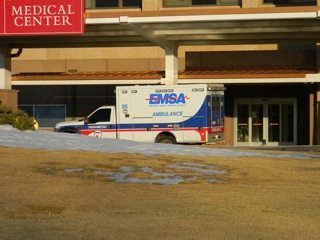 Who You Gonna Call?

In the 1984 film, Ghostbusters, Dan Aykroyd introduced the world to the Ecto-1, a 1959 Cadillac “combination car” that was large enough to carry the ghostbusters and their “proton packs.”

Ecto-1 was called a combination car because it and other like vehicles were long, high-roofed “professional cars” that doubled as hearses and ambulances. In fact, until about 45 years ago, many “ambulances” were operated by local funeral homes in communities where people would joke about the “conflict of interest” posed by an ambulance driving undertaker!

With the advance of medical science and the recognition that minutes matter when patients are experiencing heart attacks and strokes, communities in all areas of the state focused on ways to couple qualified emergency medical personnel with well-equipped ambulances that would respond to a medical crisis on a moment’s notice.

In 1976, the citizens of Oklahoma passed SQ 522 by a vote of 54% to 46%, authorizing the creation of Ambulance Districts. The constitutional amendment allowed a community or a group of communities to levy a three mill ad valorem tax to help fund an ambulance service. The millage was never intended to provide enough money to equip, man and operate an ambulance service. Instead, it was intended to subsidize the ambulance service billing revenues to keep the service in the black.

Today, the cost of operating an ambulance service continues to rise as equipment is more expensive and there is a shortage of trained EMTs. Also detrimental is the phenomenon of “uncompensated care” – care that is provided to those persons who do not have insurance and are not covered by Medicare or Medicaid.

Rural ambulances are required to care for all patients in their times of crisis and, therefore, they encounter a few patients who can pay the full rate in cash; a few who are insured and the insurance company has negotiated a relatively low rate; a number of Medicare and Medicaid patients that are not liable for anything above the deeply discounted reimbursement rate set by the federal government; and those who have no insurance and cannot pay any amount.

Gov. Brad Henry’s 2007 task force recommended that the three mill cap on levies for ambulance operations be raised. No action has been taken on that or any of the other suggestions made by the task force.

Today, in the absence of help from the state, cash-strapped communities that are already subsidizing ambulances are forced to increase sales taxes to keep ambulances rolling.

There is a solution. If Gov. Mary Fallin would accept federal Medicaid funds, $2.3 million per day would go to Oklahoma hospitals and ambulances and prevent hundreds of Oklahoma EMTs, nurses and medical personnel from losing their jobs. It would not only sustain medical care in rural areas but also roll those dollars many times over through Oklahoma’s depressed economy.

Without your ambulance service, it doesn’t matter who you’re gonna call. It matters how far they have to drive to get there.