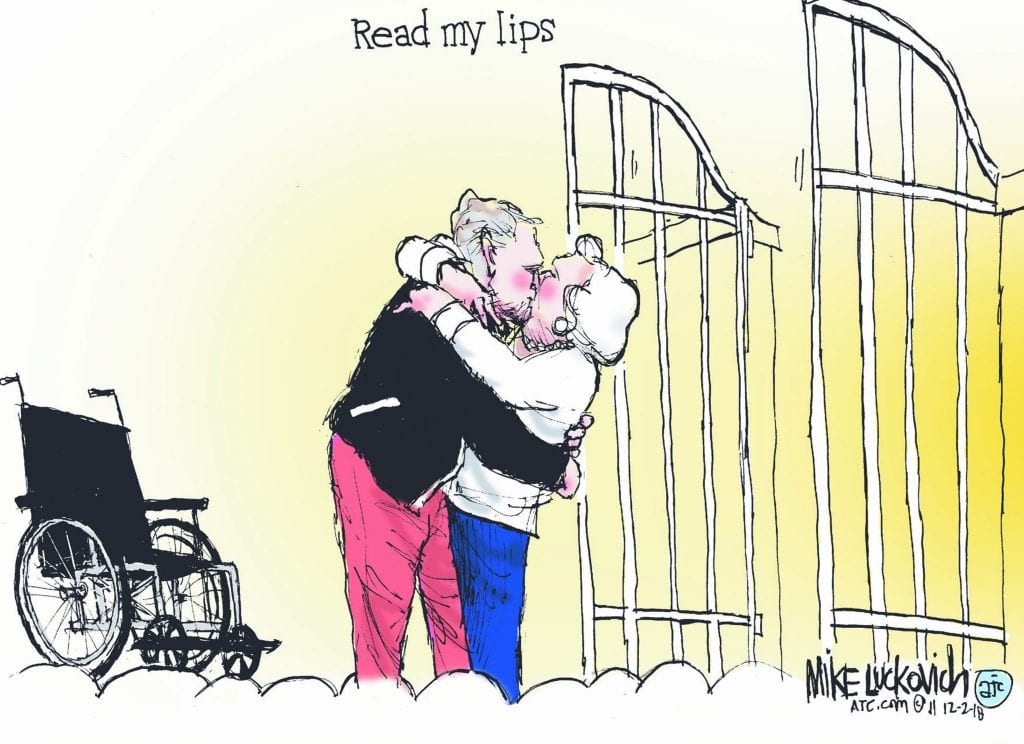 Why Barbara Bush Is So High Up In George H.W.’s Obituaries

Rarely has a president been identified so closely with his wife. That Barbara Bush never pursued a big-league career made her high profile even more remarkable. Nor did she fashion herself into an icon of elegance and glamour. She rose to prominence for simply being the partner-in-life of George H.W. Bush.

It was not just staying married that elevated her status but the nature of their bond. Theirs was an old-school marriage, meaning unbreakable. Prenup not required.

A secure marriage freed Barbara to speak her mind without fear of divorce. Not every mother could say without repercussions what Barbara said about son Jeb Bush’s running for president: “There are other people out there that are very qualified, and we’ve had enough Bushes.”

Invincible marriages enabled full-time mothers of Barbara’s generation to grow old without fear of being replaced by a newer model. And it protected faithful politicians from the distraction of a marital breakup. That applies to female politicians, as well. Nancy Pelosi’s husband of 55 years commutes between San Francisco, his business base, and Washington to be where Nancy is.

Only shallow minds could have regarded Bush – a Navy pilot in World War II who was shot down and then floated for hours on a raft before a submarine found him – as a “wimp.” Sadly, many confuse good manners and decency with weakness.

George’s devotion to a visibly aging and outspoken woman may have also contributed to a sense that he was not quite the he-man. Barbara had let her hair go white and the pounds pile on. She considered strands of pearls, not surgery, the adequate response to neck wrinkles.

During the presidency, some commentators noted the difference in appearance between the still-craggy-handsome George and the matronly Barbara. But George knew not to look in the wrong mirrors for public admiration.

As for the sanctity of marriage, consider where he came from. In 1963, Bush’s father, former Sen. Prescott Bush of Connecticut, announced that he could not support Nelson Rockefeller’s run for president because of the New Yorker’s divorce.

“Have we come to the point where a governor can desert his wife and children?” Prescott complained. To modern ears, this is a striking statement, doubly so because politically, Rockefeller was Prescott’s kind of Republican.

Strong marriages are not necessarily happy ones. Franklin and Eleanor Roosevelt were infamously estranged. But when Franklin contemplated divorce early on, his mother threatened to disinherit him. The idea was dropped.

Franklin went on to maintain a discreet decades-long relationship with Lucy Mercer, and Eleanor became a powerhouse for social reform. The marital lock let both pursue their own interests without subjecting the nation to the chaos of a domestic blowup.

No discussion of presidential marriages can leave out the Clintons. I won’t hazard a guess as to why Bill and Hillary have stayed together. What’s obvious is that their marriage is rock-solid. There was a point in the humiliating Lewinsky scandal when Hillary had to choose between supporting her husband and moving out. She supported him. It could have been love. It could have been expediency. It definitely saved the Clinton presidency.

Barbara died only eight months ago, and folks in Kennebunkport, ME, home of the Bush family compound, mourn the loss of both of them. In their eyes, a stay-at-home mom was the equal of a former most powerful man in the world. A marriage made that possible.