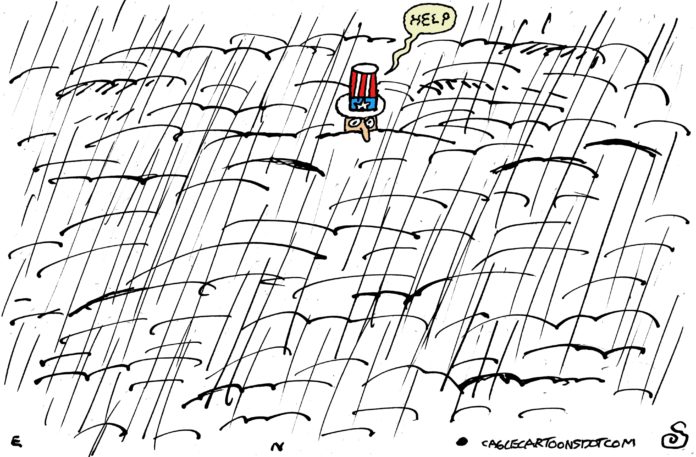 You Froze, Shoveled; The Governor Skied

It was not Mark Twain, but his pal Charles Dudley Warner, who said, “Everybody talks about the weather, but nobody does anything about it.” Well, that old editor of The Hartford Courant never met Oklahoma Gov. Kevin Stitt.

After declaring a State of Emergency for what turned out to be the state’s worst weather disaster in about a decade, our governor did do something about it, by golly. He hightailed it over to New Mexico for a weekend of skiing.

Yes, indeed, on Friday, Feb. 12, the governor’s office press release noted, “Oklahoma has already been coping with days of dangerously cold temperatures, freezing drizzle, and treacherous travel. However, the winter storm expected to begin moving through the state Saturday night into Sunday could bring up to a foot of snow in parts of the state with temperatures in the single digits and wind chills as low as -15 degrees.”

In boldface type, because he was so serious, Stitt claimed, “The State of Oklahoma is prepared and ready to respond to this storm. I encourage all Oklahomans to pay attention to the weather, check on your neighbors and use the Drive Oklahoma app to monitor travel conditions throughout the weekend.”

He was preparing for a ski trip.

Also in bold type, in the governor’s own release, we saw, “The Oklahoma Highway Patrol is encouraging all residents to stay home during the upcoming winter weather event,” said Col. Sugg, chief of the Highway Patrol.

Residents should stay home. A governor who preaches “personal responsibility,” though obviously a bit shaky of its meaning, can abandon the state to its wintry fate.

Thus, while Oklahomans were dealing with Snow-pocalypse No. 1 Sunday, a conscientious person with a camera phone took a picture of our governor in a burger joint in Santa Fe. Said photographer then sent the photo to Oklahoma’s premiere satiric web site, The Lost Ogle, which posted it Monday morning.

The Tulsa World re-ran that story the next morning, the TV stations remained committed to driving down every snowy road they could find so they could tell viewers not to drive down snowy roads.

In fact, as I write this on Wednesday afternoon, I still see no evidence of any intention of the TV stations in the capital city to cover the Republican governor’s abandonment of responsibility in the face of a weather catastrophe.

Channel 9 is the only station I receive locally. I’ve given up hoping for Kelly Ogle’s [overpriced] two cents’ worth of high dudgeon. I guess he’s using his cloak of righteous indignation to cover up.

By Monday evening, the governor had finished his first-priority skiing and was back in the state, on a zoom interview with other state officials discussing the dire situation – which he was just witnessing. He looked angrier than concerned.

Since then, our goobernor has been acting all official and serious and concerned – and getting lapdog TV coverage all around. Stitt is doing this, doing that.

Stitt has also been talking to Channel 9 reporters, who seem to have forgotten to ask him how the skiing was in New Mexico; how did he get there and back; did his security detail go with him; who footed the bill; can he keep his wife off the roads; how good was that burger?

Through no virtue of my own, the storm’s impact on me will only come with next month’s utility bills. I had about a two-second light flicker one day. Had to reset the electric clocks. Much of this state and my family and friends in Texas have been hit harder – blasted. [Oklahoma, Texas, Florida and South Dakota are leading the field in the race to see who has the worst governor.]

We received what we Hoosiers used to call a “dry snow,” which is light and not prone to sticking on trees to bring down limbs and power lines. It’s flat country up there. I know now that technically this is “powder,” apparently the best snow for skiing. So, the next time you see the governor, ask him how the powder was in New Mexico while his home state was getting buried.

Editor’s Note: Edmondson also shared the following lyrics, to be sung to the tune to The Yellow Rose of Texas.

warned us of heavy snow:

Stay home and hunker down in place

if you’ve no need to go.

So, while the state is digging out

and freezing in the cold,

I guess we’ll be a Top Ten state

But he’s having fun in Santa Fe.

No worries. What the heck?

We’re better off when he is gone,

not playing the autocrat.

He doesn’t care about you or me,

and that’s a cold, hard fact.