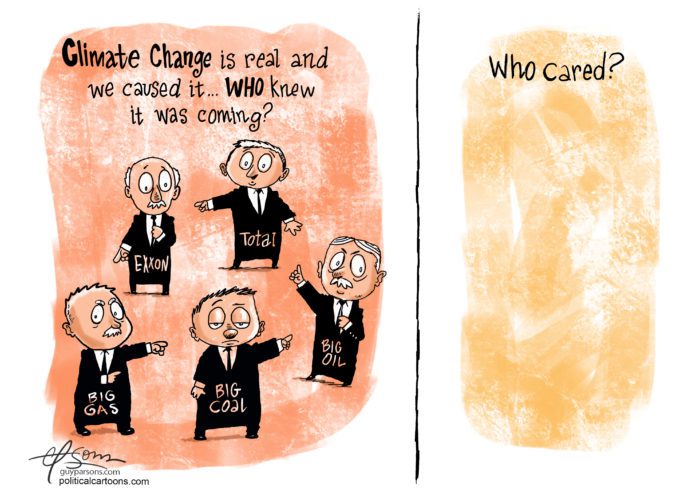 As if we needed more proof that world leaders [?] prefer the comfy status quo – temporary though it will be – over any action to reduce the heat on our planet, the next United Nations climate negotiations will be led by Sultan al-Jaber, head of the Abu Dhabi National Oil Co. Hello, Mr. Fox. Here’s the henhouse.

Of course, if you want to cut back on greenhouse gases, who better to lead the charge than a guy whose country/company “plans to increase its production of crude oil from four million barrels a day up to five million,” according to the Associated Press.

Last year was the fifth or sixth warmest on record, the AP also reported, taking the entire planet into consideration. The United Kingdom recorded its hottest year ever.

Xavier Miró of Barcelona’s El Punt Avui reported, “And we start the year with the confirmation of the British meteorological service that the hottest January day on record has been recorded in 10 European states: Poland, Germany, Denmark, Czech Republic, Holland, Belgium, Lithuania, Latvia, France and Spain.”

Sounds like Lawton, Oklahoma, USA, where 11 of the first 12 days of the year produced record high temperatures.

The Scotsman reported, “scientists revealed that the average global temperature hit 1.15 degrees Celsius above historic levels last year … Professor Tim Osborn, of the University of East Anglia’s Climatic Research Unit, said their temperature data was consistent with a long-term warming trend of 0.2C per decade. So, with carbon emissions still rising, it means the target of limiting global warming to 1.5C – beyond which particularly dangerous effects may be triggered – could be breached in as little as 15 years.”

From the loss of polar bear habitat in the Arctic through the devastation of European glaciers to the drying up of desert oases, the dangers of climate denial are already coming into play.

And so U.S. Climate Summit Representative John Kerry – as if we needed more proof of mainstream Democrats’ corporate collusion – greeted the appointment of an oil tycoon to head climate talks not with disdain, but with, “‘I think that Dr. Sultan al-Jaber is a terrific choice because he is the head of the company … I have great confidence that the right issues are going to be on the table, that they’re going to respond to them and lead countries to recognize their responsibility.”

Of course. We all know how responsible oil companies have been when it comes to putting their polluted profits against the general welfare.

In 1979, Exxon scientists predicted the current state of global warming – in in-house memos that the company buried while publicly denying such consequences.

About the same time, President Jimmy Carter suggested using less energy by lowering our thermostats and maybe wearing a sweater.

You would have thought he suggested burning Old Glory in our fire places for warmth for all of the mockery, disdain and condemnation he received. It was considered un-American to even suggest any reduction in consumption.

Carter’s suggested temperance created a national “malaise” as Americans’ feelings were hurt by the concept of limited planetary resources and limited growth.

Corporate shills – from public relations flaks to media hacks to purchased politicians – led the assault back then and today deny climate change or its effects while touting “clean coal” or claiming natural gas is “the clean fuel of choice.”

Meanwhile, global warming creates dangerous weather patterns. Atmospheric rivers pound California with rain – and snow in the mountains. The new Tornado Alley in the Mississippi Valley reaps the deadly whirlwinds our collective indifference has sown. And everybody needs more water.

And so the United Nations plans a climate summit in Abu Dhabi with an oil executive holding the gavel. At least we know what to expect and how much time not to waste with this boondoggle annual party.

The Sun King, Louis XIV of France, assessed the excesses of his lifestyle and told one of his mistresses: “Après moi, le déluge” – “After me, the deluge.” And, before the 18th century was over, Louis XVI paid the price at the guillotine.

Similarly, our corporate robber barons keep telling us: “After our polluted profits, the catastrophe.”