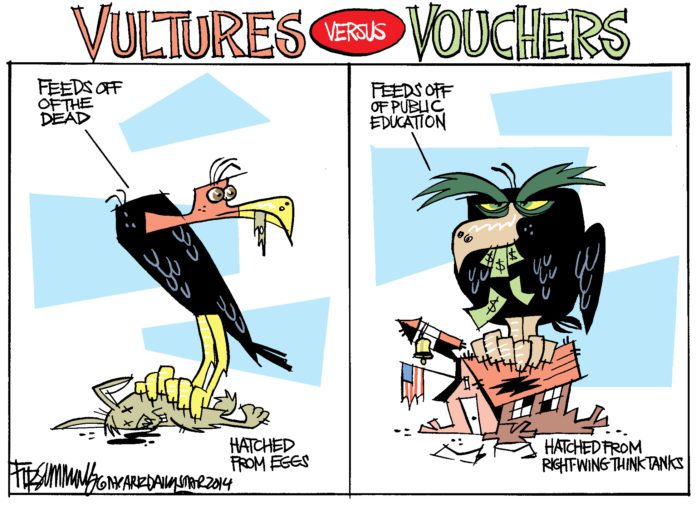 They are back. After putting just a pittance into public school funding for the current year, two of the leading pro-voucher senators are back with voucher-lite proposals.

Sens. Julie Daniels of Bartlesville and Shane Jett of Shawnee have revamped and offered even goofier versions of the scheme to extract money from our public schools than those trotted out last year by Senate President Pro Tem Greg Treat of Oklahoma City.

In fairness, Daniels suggests her bill will cost about $245 million which means, of course, it has no chance of passing, so it is nothing more than a Trojan horse to keep the voucher blah blah going on. Jett has filed bills that are unworkable on their face, due to his effort to create even more classes of schools within counties, dictate what they teach or don’t, and exclude entirely some of the smallest schools from any opportunity to participate in the process.

The reason I say the Daniels gambit has no chance in the Legislature is the price tag of nearly a quarter of a billion dollars. Why? The Legislature gave our public schools all of just $17 million last year, this while sitting on $4 billion in the Rainy Day Fund. And, of course, the hot button issue being pushed by Gov. Kevin Stitt in the upcoming session is to further reduce the tax base by cutting again the personal income tax rate.

Before you start cheering, this means an even greater reliance on the severance tax applied to oil and natural gas notwithstanding the fact it is very volatile and unpredictable.

Pro Tem Treat perhaps learned his lessons from last year on the topic since he did not file any voucher proposals this year. Treat also almost lost his job in a very close vote as to whether he would remain leader of the higher body. Reports indicate he prevailed on a 21-19 tabulation within the Republican caucus, hardly a resounding endorsement. Many attribute the situation to his voucher push of last year, which pitted rural senators against their more urban dominated colleagues.

So the question becomes, in light of House Speaker Charles McCall’s adamant opposition to any voucher legislation, why do these senators push proposals they know are dead on arrival in the lower chamber?

Cynics say just publicity, since both Daniels and Jett are near the end of their allotted time as senators and, therefore, may be positioning themselves for some other elected or appointed opportunities; maybe in Stitt’s administration since he remains a strong believer in vouchers.

Of course, some say term-limited Stitt himself may not complete his second term due to his well-known aspiration for higher office in DC, perhaps as VP loyalist to former President Donald Trump.

Well, I’m for that for two reasons: [1] It would get anti-public education Stitt out of state government and [2] since Trump will lose to either a party opponent such as DeSantis or President Joe Biden in November 2024, such a step by Stitt would send him back to peddling mortgages instead of starving our schools of money, encouragement and resources.

And that would be a win-win outcome for not just Oklahoma but our entire nation as well.

Previous article
Treasure Seekers
Next article
After The Profits, The Catastrophe