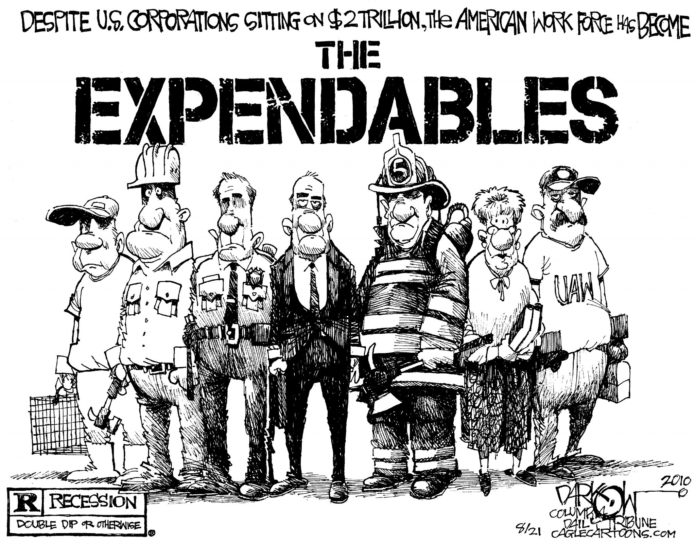 When the little book Animal Farm, written by Eric Arthur Blair, whose pen name was George Orwell, first appeared in print, it was a satirical and critical treatment of the oppression and subjugation of the peasant class of Russia.

In 1946 Animal Farm was a depiction of what Orwell saw as the dangers of totalitarian governments and specifically Stalinist Russia. The comparisons were so thinly veiled that finding a publisher was difficult. As Orwell would later admit Animal Farm was meant to help destroy “the Soviet myth.”

In Animal Farm Orwell left us with a lesson about the human contribution to political terror that will always be as up-to-date as next year’s elections.

With that not too pleasant thought, I want to go back to the Farm. My intent is to look at and interpret events, perhaps even twist a few, in this 21st Century.

But permit one last observation from the Introduction, written by C.M. Woodhouse in August of 1954: “Already Orwell has launched the ‘long haul’ of wresting back some of those cardinal, once meaningful, words like ‘equality,’ ‘peace,’ ‘democracy,’ which have been fraudulently converted into shibboleths of political warfare; and already it is impossible for anyone who has read ANIMAL FARM [as well as for many who have not] to listen to the demagogues’ clap-rap about equality without also hearing the still small voice that adds: ‘. . .but some are more equal than others.’”

Watch your step – might be something fresh on the ground.

Now Animal Farm is populated by … animals. Yep, common farm animals. Well, maybe not so common and certainly a diverse collection. There were the dogs, the chickens, the pigs, the cows, the horses, the sheep, the goats, the ducks and one old mule.

My telling recasts these characters. My thrust is aimed at the Corporate-ocracy that threatens the middle class with extinction.

There was a wise old pig named Major at the Farm. His wisdom was held in high esteem. He had a vision and called a meeting to share his knowing. What he shared was that large corporations would have total freedom to pay for favors and in turn provide financial support to those that did their bidding.

I call this character No. 1 SCOTUS.

Now SCOTUS was getting up in years and everyone suspected his end was at hand. Besides that he had become painfully predictable.

There were those desiring to fill his spot when it was empty. Seemed that only a pig would want to fill another pig’s spot. There were two. One was called Snowball and the other Napoleon. As the names indicate one didn’t have a chance to claim the position and the other ruthlessly pursued it.

Napoleon claimed the prize. After all he was the next largest pig on the Farm and, to no ones surprise, had a high regard for his ability to make things happen. Napoleon, in my version has a name other than Napoleon. The name is Pig Koch.

It soon became apparent to everyone that Pig Koch was the one in charge. Anyone doubting that fact would surely be reminded. Pig Koch even had a team of Security Dogs, he himself had bred to enforce his authority.

On the Farm were many workers. They worked, as best they could, to plant and harvest crops, improve living quarters and build a contraption that had the potential of creating a much better life for the entire farm.

The animals believed that, if they worked hard enough, their labor would pay dividends and eventually life would be really good – as good as it can be for farm animals.

Two of the citizens of the Farm, in particular, worked harder than everyone else. The horses carried the heavy loads and pushed the hard to move loads and worked without complaint. It was said that old Boxer and his companion Clover never lost hope that things would be better, if only they worked and toiled to make it so.

Pig Koch kept an eye on the horses. Their energy and enthusiasm pleased him. But he also was fearful that they might be looked up to by the others. Thus began a time of attitude adjustment for the other animals. Funds were reduced so that no matter how hard the horses worked and tried to encourage the others, the efforts did not seem to make a difference. Food was scarce, more so now than before. Shelter was no longer something that was available to everyone. Many Animals had to rest or sleep outside the barn. The dreams of a better life seemed to be some thing far off – a distant memory – almost remembered.

Boxer, the worker, and his companion Clover continued to labor. They never lost hope – or so it was said. Pig Koch needed to do something to change the others opinion about the workers. He hired a propaganda director. His storied name was Squealer – my name, the one which I see fit to give, is R. Pig Murdoch.

The propaganda director’s job was to keep the animals “informed” of current events and explain the complexities of more recent developments.

At the beginning the Animals had written a Governance Document. Simple in content but setting out freedoms and liberties that would protect them. Life they thought was secured and clearly spelled out. Pig Koch needed to change that perception. He did not want anyone feeling secure. That task was for R. Pig Murdoch to accomplish. On a semi-regular basis he would dance through the Farm yard, carefully avoiding stepping in anything and he would proclaim to one and all that they needed to revisit the Governance Document. To refresh their memories.

Often, upon revisiting the Document, the Animals would sense that something was not as it had been – but their memory was not clear. R. Pig Murdoch would assure them that everything was just as it should be and go dancing and prancing back to Pig Koch.

Tragedy visited the farm one cold winter day. Old Boxer had been feeling not quite his old self. But continued to work. Push loads that were hard to move. Carrying loads too heavy for the others. The worker Boxer fell ill as he worked, alone on that cold winter day. He was helped back to the barn where word was sent to Pig Koch that the worker Boxer needed medical help. Help came. The wagon was empty and Boxer loaded in. The story was that he would be taken to a hospital and there would receive the attention he needed. When he had recovered he would return to live out his remaining years among his friends.

The fact was that Old Worker Boxer was off to the glue factory and would never return.

Fear took hold of his old companion Clover. It seemed that the hope was dying. Pig Koch had taken care of a liability. Boxer had been an asset while he was able to work and bring wealth to “the Farm.”

But when his usefulness ran out, he was cast aside.

There were lots of pigs on the Farm and one day the other Animals saw the strangest of sights. Standing, as it was, upright on their hind legs and wearing articles of clothing, these pigs of the Farm were no longer “of the Farm.” They were of something else, altogether. Something strange and ominous.

It was as if they were no longer benevolent leaders and teachers. They were becoming like the other two-legged beasts that had for so many years oppressed and murdered and – gasp – eaten the animals.

The animals, too late for action, had become slaves once again. There was no longer a working class – [middle class] – there were only the pigs and the rest. Animals all.

Some looked as though they might be equals … but some were more equal than the others.

Life on the Farm changed that year. No one was thinking about a better future. The only thought any mind could managed was how to survive the Rule of the Pigs.