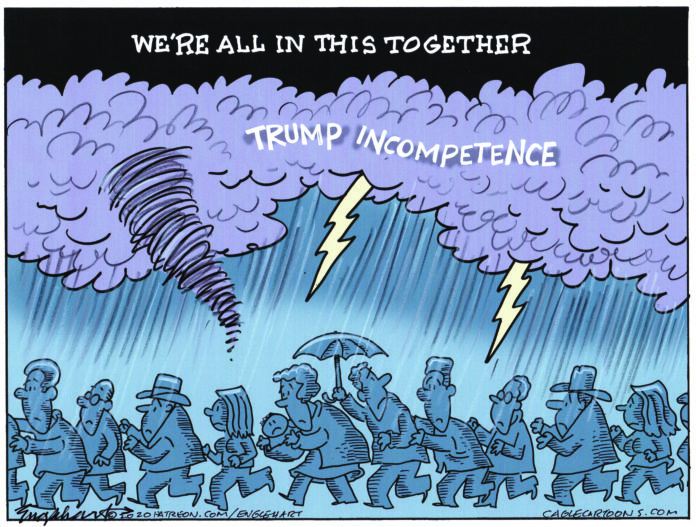 Republicans once tried to pose as a party of hard-headed realists. It was a sham, but that was their stance. Those days are long gone.

You cannot even pretend to realism if you live with an aversion to facts. The president’s unwillingness – inability? – to consider the scientific evidence regarding the spread the COVID-19 situation has landed America in the middle of a health crisis.

It should come as no surprise that Trump, who has dismantled or neutered all science-based agencies, refused to let an expert speak toward his pushing of an untested drug to treat the pandemic – a drug in which Trump has money invested, the Huffington Post reported Apr. 7.

But ignoring science has been a hallmark of this administration, most especially regarding the growing climate crisis. Trump, Moscow Mitch and their cronies gleefully ignore scientific facts to undermine the health of Planet Earth every chance they get.

And an American health crisis is just the excuse they savor to promote their polluting pals.

PoliticusUSA reported Mar. 27: “The Environmental Protection Agency announced it would suspend enforcement of environmental regulations because of the coronavirus pandemic. The EPA made the decision following ‘an influx of requests from businesses for a relaxation of regulations as they face layoffs, personnel restrictions and other problems related to the coronavirus outbreak,’ according to The New York Times, which broke the story.

“The agency’s order states that it will not issue fines for violations of certain air, water and hazardous-waste-reporting requirements, effectively allowing businesses to regulate themselves amidst the crisis. The changes are retroactive to March 13 and are ‘only so that facilities can concentrate on ensuring that their pollution-control equipment remains safe and operational.’”

We have already established that Greed’s Own Party values profit over people – even in this emergency. So, it should come as no surprise that corporate wishes take precedent over public safety.

As reported in the Huffington Post at the time, “Environmental experts have warned of the far-reaching and likely devastating impacts of the Trump rule, which could put the drinking water of millions of Americans at risk, imperil food safety and threaten countless natural habitats ― and the creatures that call them home.

“‘The move is about protecting polluting industries instead of public health, said Blan Holman, a lawyer and water expert at the Southern Environmental Law Center.’”

Also at that time, Reuters reported on a study from the Environmental Working Group: “The contamination of U.S. drinking water with man-made ‘forever chemicals’ is far worse than previously estimated with some of the highest levels found in Miami, Philadelphia and New Orleans …

“The chemicals, resistant to breaking down in the environment, are known as perfluoroalkyl substances, or PFAS. Some have been linked to cancers, liver damage, low birth weight and other health problems.”

So, with the situation worse than we knew, the president chose to make it worse.

And those relaxed standards from Trump’s EPA? In February, Common Dreams reported “A study published … in the journal Nature found that extraction and use of fossil fuels may emit up to 40% percent more climate-heating methane than previously thought – underscoring humanity’s ability to significantly limit global temperature rise by rapidly transitioning to renewable energy.”

Again, the Trump response is to take a situation that is worse than we thought and make it worse. Deliberately. And why not go whole hog and make it easier for carmakers to pollute the atmosphere? Check. Done that, that’s the way of Trump and the GOP.

“Of all the bad things President Trump has done to the environment, this is the worst,” said Dan Becker, director of Safe Climate Campaign, as reported by Common Dreams.

Promoting corporate profits is the sole goal of Greed’s Own Party. They act as if facts don’t matter. But cold hard facts ignore this deliberate ignorance – and Americans continue to face the consequences – with an epidemic much worse than it should have been and an ever-degrading world that will compromise our way of life.