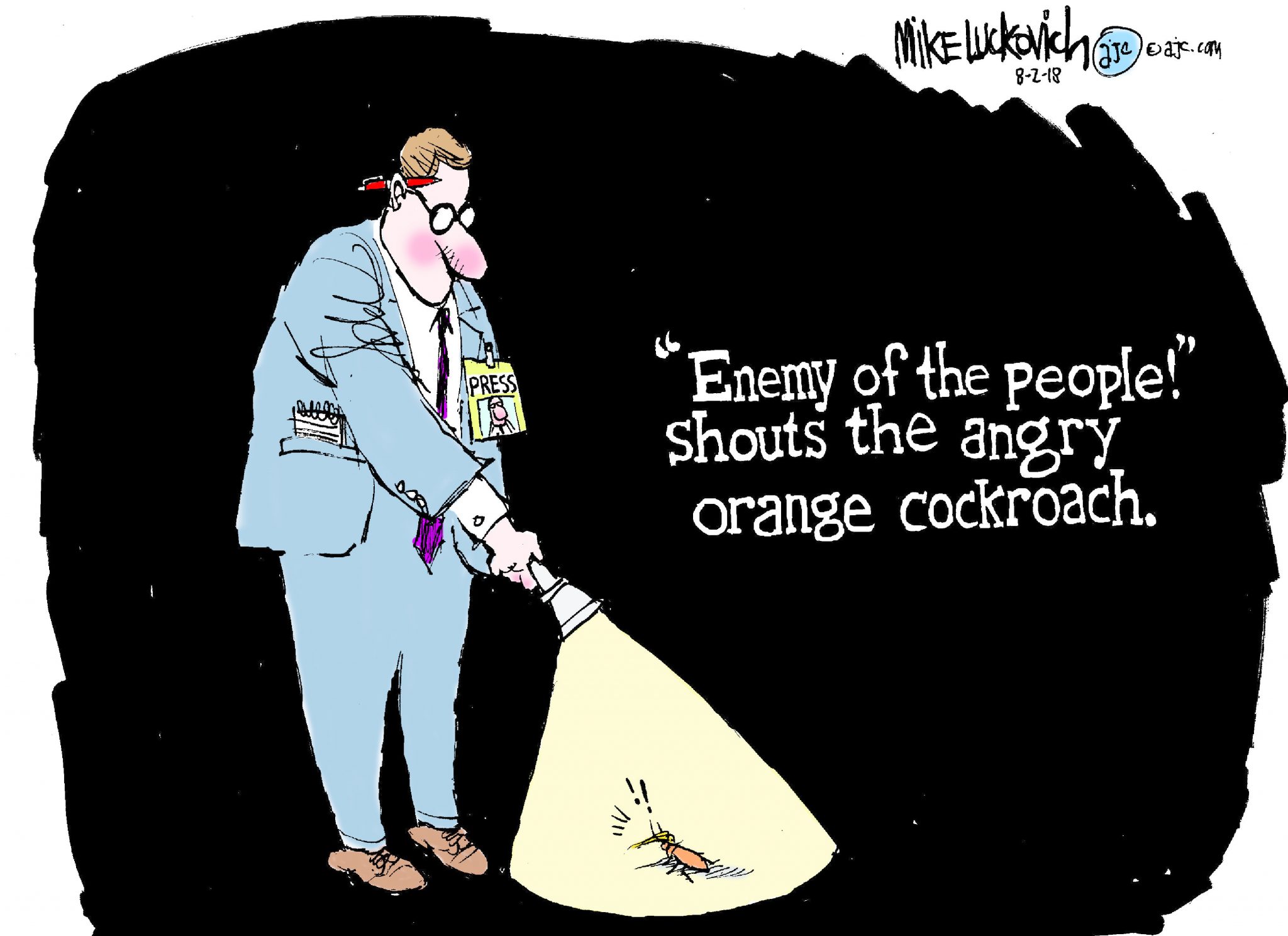 Enemies Of The People

The president of the United States has repeatedly accused the constitutionally empowered news media of being the enemy of the people. In his stroke-me “rallies” for Republican candidates, he raves and rails on about how evil, untrustworthy and fake they are. He points them out to his frothing minions at these cult meetings and they respond with vitriol and threats of violence. The president relishes this reaction, because he gets away with bullying those who objectively report the facts and the news.

Why would he create such hostility toward a group of people who run toward mayhem, instead of seeking fake draft deferments? Why would this creature from slime TV have the audacity to attack the press’s character when he can’t/won’t explain the fortunes he made from fiddling the bankruptcy laws? What sort of cult figure would coddle a Russian thug/president over his own intelligence community?

It must be getting quite obvious that Donald Trump understands nothing about the Constitution, nothing about the character of intrepid reporters and news agencies, and even less about the consequences of his actions on the fabric of our nation. It’s almost as if Trump was a child with Fetal Alcohol Syndrome where the victim has no compassion for anyone but himself and no interest at all in the consequences of what comes out of his mouth.

Why is Trump acting so guilty on so many fronts by attacking those trying to ferret out the truth of his suspiciously criminal enterprise being run from his office?

As the Mueller noose grows tighter around the necks of the Trump family and hangers on, the vitriol and outright rage coming from the former leader of the free world becomes more frequent and more outrageous. This, in psychological circles, is called dissembling.

We are witnessing a guilty criminal squirming and twisting to avoid being proven to be committing crimes. His behavior will continue to become more unhinged as the day of reckoning comes nearer and nearer.

One of the bigger worries about a dissembling madman with nuclear weapons codes is that he may go completely off the rails before somebody with a still functioning brain tackles him and prevents this damned fool from destroying the world. People more expert than I are also saying these things, though they couch their comments in less pointed language.

Historically, news gatherers and reporters have indeed run toward mayhem and conflict to record the facts and the horrors of human disruption. There never seems to be a slackening of those conflicts and our brave and dedicated news people do what they can to report the truth.

My spouse is a former journalist and she informs me that reporters feel dedicated to their duties rendered to them by the Constitution. They feel they have a duty to the citizens of the country to report the truth and not fake news.

This applies to real journalists, the ones manning the barricades at the New York Times, the Washington Post, Mother Jones, Axios and many other companies and agencies. Notice that Fox News and Breitbart are not included. They do notdo real news. They do the fake news that Trump embraces so readily. Why? Because those latter two “outlets” are shamelessly committed to supporting anything and everything that Trump wants and says.

They spin, they don’t report. Trump’s lies are their truths. It’s that simple. How does anyone with even a partially functioning brain justify the 16 lies per day spilling from Trump’s mouth at high volume.

So, here we have a pathological liar masquerading as president of the United States. We have two outlets of nonsense supporting those lies and the liars. We have millions of people watching these outlets and these outlets alone, swallowing every word because it feeds their prejudices [confirmation bias], their self-centeredness, their self-righteousness [evangelicals] and their sloth at not being willing to actually dig a little deeper for the truth.

It’s right there in front of them. All they have to do is change the channel. Of course, if the truth is so inconvenient that these dupes are afraid to accept it and see the seams of ours country’s fabric being stretched to the limit, then they will go broke, get sick and die defending a lie. That’s their right.

Meanwhile, we have enemies to slay. We have terrible, corrupt politicians to remove from office. When one stops to consider the accuser of professional journalism and his daily battle with the truth, we can’t be inured to what is, in fact, the enemy. It isn’t the media. It isn’t the press.

The enemy lies within those tortured minds that accept Donald Trump as their personal savior, lies or no lies. They don’t care that the liar-in-chief yells at those who are digging up the truth on his family, him and his minions, all of whom seem to be so cozy with Russian intelligence that our very national sovereignty is as great risk.

None of the answers will be: The Media. They don’t do that … except for those outlets that feed a depraved audience … the Trump supporters.

Finally, after asking all those questions, decide who is the enemy of the people.

– Denver resident Vern Turner is a regular contributor to The Oklahoma Observer. His latest book, Why Angels Weep: America and Donald Trump, is available through Amazon.