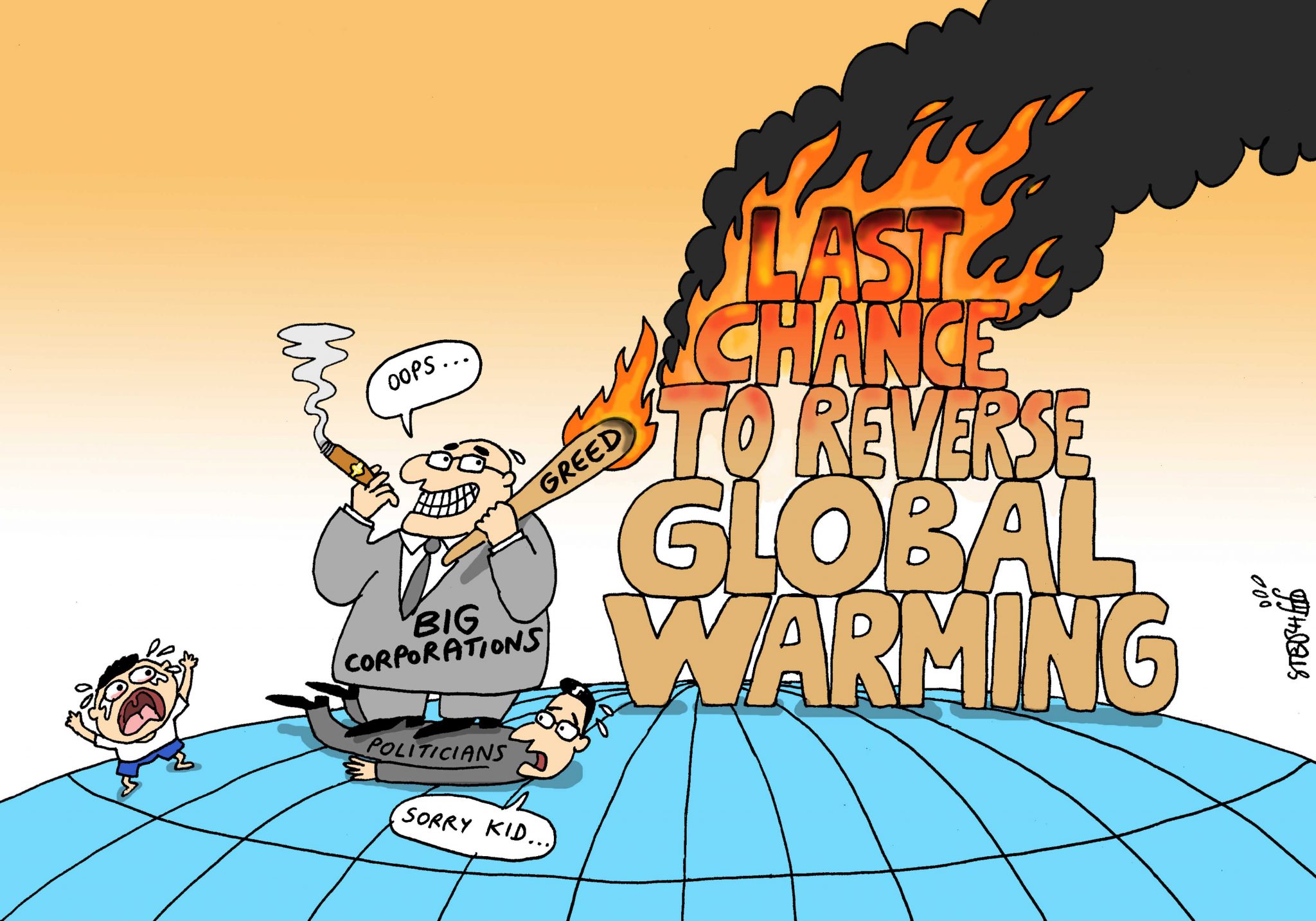 On Aug. 1, Science Daily cited a report from Australia’s Monash University: “Heat wave deaths will rise steadily by 2080 as globe warms up.”

That same day, NBC announced: “Rising seas could knock out the internet – and sooner than scientists thought. New research says 4,000 miles of internet cable could be underwater by 2030.”

Also on Aug.1, the CBC reported: ”At the moment, drought and fire are ravaging much of the planet. This past June was the fifth warmest June on record, and the 402nd consecutive month above the 20th century average.”

Again on Aug. 1, our president said there was no need to increase vehicular gas mileage and rolled back emission standards. Worse mileage equals greater profits for Big Oil. Dirty water, smog and an increase in greenhouse gases.

Nor should we be surprised that the same news cycle featured Oklahoma Sen. Snowball Inhofe, “proud” to co-sponsor a bill to curtail local environmental protections because, “States hostile to fossil fuels have taken advantage of loopholes in the Clean Water Act to block projects they simply don’t like, circumventing the needs of other states and communities. This must stop.”

On Aug. 3, Common Dreams reported: “Earth’s Carbon Concentrations Have Soared to Levels Not Seen in 800,000 Years.”

“One NOAA oceanographer warns that even if humanity ‘stopped the greenhouse gases at their current concentrations today, the atmosphere would still continue to warm for next couple decades to maybe a century.’”

On April 11, Science Daily reported: “Nearly a century and a half after explorer John Wesley Powell zeroed in on the 100th meridian west as the dividing line between the humid east and arid west of the United States, researchers say he was right – but that climate change is now moving the line eastward …

“In the northern plains, rainfall has not changed much, but temperatures are going up, increasing evaporation from the soil. Further south, concurrent shifts in wind patterns are in fact causing less rain to fall. Either way, this tends to push western aridity eastward. Data collected since about 1980 suggests that the statistical divide between humid and arid has now shifted closer to the 98th meridian.”

In Oklahoma, that shift in dryness moves roughly from the eastern boundary of the Texas Panhandle to Highway 81 three blocks east of me.

And the frog keeps sitting in the warming water.

“The United States has just come off a record year for weather and climates disasters,” Kuchment writes, “ and by most accounts, it’s only going to get worse …

“Between 2041 and 2050, Dallas-Fort Worth may see August temperatures rise from a mean of 86 degrees Fahrenheit at the end of the 20th century to 94 degrees, with extremes rising above 120, reports one study by scientists at the University of Texas at Arlington.”

Historically, my part of the Red River Valley is hotter than the Metromess.

“Longer droughts and more extreme rainstorms will pose a challenge,” she writes, “for those who manage drinking water supplies, those who raise cattle, and those who oversee our roads and railways.

“The changes may also have unexpected effects on people’s daily lives, including jobs. Intense heat can imperil cars and airplanes, evaporate drinking water supplies, and halt outdoor labor such as farm work and construction.”

“Years of studies by government and environmental groups have warned that future demand for water is threatening to outstrip availability, particularly in the drought-plagued West and Southwest, unless policymakers take steps to reverse those trends.”

And just as shortsighted industries pollute for profit, selfish homeowners demand lawns resembling those in places with twice our average rainfall.

Unfortunately, Oklahoma’s Republican failureship is so beholding to Big Oil that, almost to a man and a woman, it lies in the face of climate change facts to promote their puppet-masters.

Agricultural decimation and future xeriscaping aside, Aimee Cunningham pointed out Apr. 3 in ScienceNews that: “Year in and year out, heat claims lives. Since 1986, the first year the National Weather Service reported data on heat-related deaths, more people in the United States have died from heat [3,979] than from any other weather-related disaster – more than floods [2,599], tornadoes [2,116] or hurricanes [1,391] …

“As greenhouse gases accumulate in the atmosphere, heat’s toll is expected to rise. Temperatures will probably keep smashing records as carbon dioxide, methane and other gases continue warming the planet. Heat waves [unusually hot weather lasting two or more days] will probably be longer, hotter and more frequent in the future.

“Beyond deaths, researchers are beginning to document other losses: Heat appears to rob us of sleep, of smarts and of healthy births. ‘Heat has the ability to affect so many people,’ says Rupa Basu, an epidemiologist with the California Environmental Protection Agency’s Office of Environmental Health Hazard Assessment in Oakland. ‘Everybody’s vulnerable.’”

Another possible area of vulnerability – which we might not notice – would come if pollution really does make us dumber, as is being debated at present – if that is not already manifested in the short-sightedness of proud polluters.

I have a passel of nieces and nephews. Many of you have children and grandchildren. Fifty years from now, what will they think of us and the world we’ve left them?