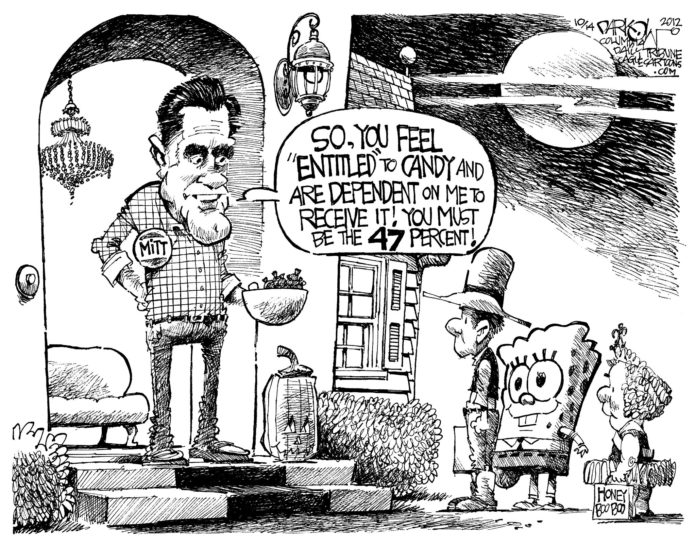 I had fear in my belly back in 2000 when I understood who wanted George Bush in office. George Bush is a likeable fellow, but he has never known a world in which his kind didn’t get what they wanted. It was clear as he campaigned that he couldn’t imagine any world but the one he inherited.

When he started talking about what he wanted to give the rest of us, I knew we were in for trouble. We got it, too – a war that destabilized the Middle East, an education system that rewards private companies at the expense of students and public schools, and an agenda that has little to do with real problems and real solutions.

There’s a reason you don’t see the former president, for all his likeability, on the campaign trail. Even his own party knows his eight years in office were a disaster for the working class.

So could be the next four years if we elect another son of privilege. And this time, the candidate isn’t a likeable buffoon; he’s a bully.

There are a lot of people who are counting on the Affordable Care Act staying in place. We are counting on leaders who will do the right thing to save Medicare and Social Security, who will make hard choices that might involve higher taxes. Both programs are worth saving. Both are worth our tax dollars. We are all, rich and poor, in this together.

We need Democrats and Republicans cooperating to get things done. Those in positions of power on both sides need to worry less about power and more about the people they were elected to serve.

Compromise isn’t a dirty word. The budget shouldn’t be held hostage and the needs of the people shouldn’t be ignored.

We want to work. We want to care for our families. We want to know that our government of the people is there for us. And we want our president to understand that not all of us were born to privilege.

Who will the man sworn in, in 2013, serve? Will his policies make your life better? Think carefully about how you answer this. And go vote.