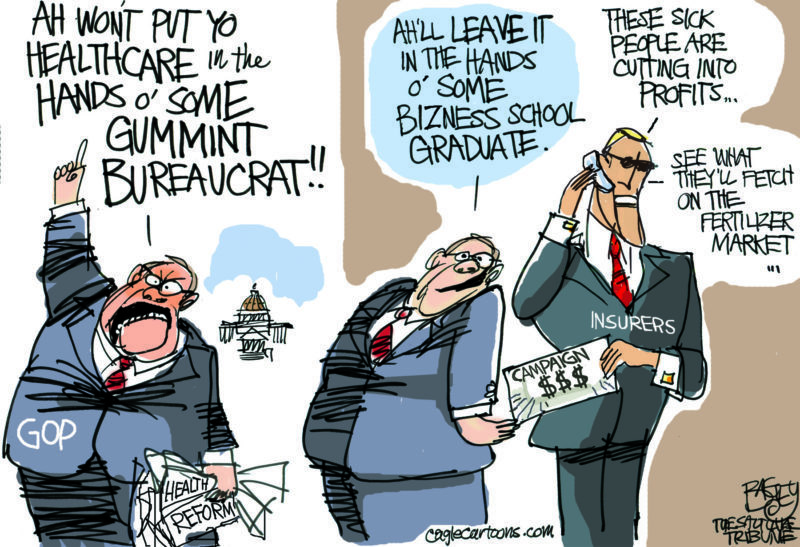 CBS News, Feb. 20: “An Alabama woman said she wished her husband had let her die after the hospital where she received an emergency appendectomy sued the couple over a bill for more than $30,000. KC Roberts and her husband Daryl said they paid what they could each month toward the bill for three years, but in September, they were sued for the full amount, plus interest, a total of almost $37,000.

“‘I told my husband, I wish you’d have let me die,” KC said to CBS News Consumer and Investigative Correspondent Anna Werner. “‘I’ve said, “Honey, I love you and I love my family, but if you had let me go, today you would not be going through this.'”

The story stated, “An estimated eight million people in the U.S. started a campaign for themselves or someone in their household, and an estimated 12 million started one for someone else, according to a news release by the research institution NORC at the University of Chicago.”

Sen. Bernie Sanders’ response, reported by Common Dreams, was “No one should have to beg for money to get the health care they need in the richest country on Earth.”

The Common Dreams account reported: “As she introduced the House version of the Medicare for All Act of 2019 last February, Rep. Pramila Jayapal, D-WA, lamented that GoFundMe is becoming one of the most popular insurance plans in the country.

“It comes down to a profit-making motive … that puts profits over patients,” said Jayapal.

The KOCO story also noted, “A 2019 study found that medical problems contributed to two-thirds of all U.S. bankruptcies.”

Of course, it could be worse if you lived in Kansas, where, Independent reported Feb. 10, medical debtors are subject to a “law under which the court can compel people with outstanding medical bills to appear in court every three months and make a defense of their poverty.”

Failure to jump through hoops straight out of a Dickens novel – with the hospital’s lawyer/debt collector getting paid throughout the process – can lead straight to debtors prison. And has. In America.

There is a worse alternative. Last August a Washington state man shot and killed himself and his wife “after raising fears about struggling to pay medical expenses for her ongoing health conditions,” according to Independent.

Only the Democratic-controlled House of Representatives stands between Americans and the massive health-care cuts proposed by the president in his budgets [but not his rhetoric] to offset his tax-cut-gift-for-the-rich.

Regardless of Republican lies, they have never had a plan besides cutting health services for as many people as they can.

And, here in Oklahoma, Gov. Kevin Stitt is eager to implement the bogus Trump Medicaid block plan in order to reduce the impact of the citizen-generated Medicaid expansion initiative, which he will try to put on the ballot likely to draw the fewest voters.