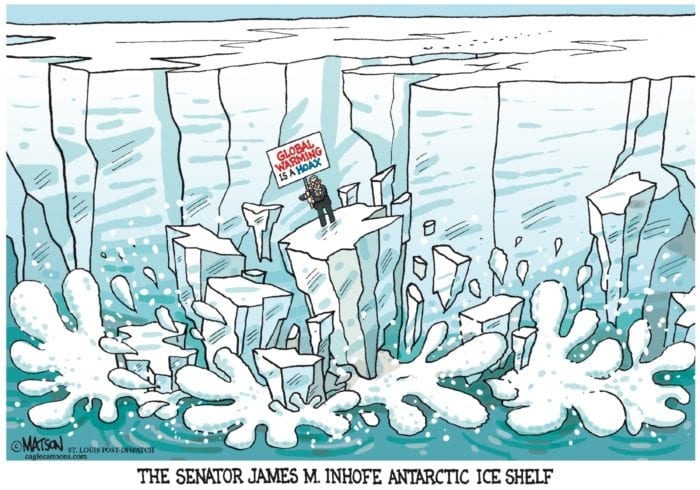 Wake Up, Oklahomans, And Work To Defeat Inhofe

At age 85, James Inhofe has decided to run for another term in the U.S. Senate.

Inhofe – who has served an Oklahoma record 32 years in the U.S. Congress – stated that he was motivated by a desire to counter the “radical socialist agenda of the Democratic Party.”

It is not clear to me what planet Inhofe lives on or why any rational person would vote for him.

Contrary to Inhofe’s view, the Democratic Party has moved significantly to the right over the decades Inhofe has been in office, repudiating its New Deal heritage in many aspects.

The Democrats, for example, under Presidents Clinton and Obama bailed out the Wall Street banks, sustained or extended corporate tax cuts, repealed the Glass Steagall Act which had mandated the separation of investment and routine banking functions, cut food stamps and welfare programs, failed to stand up for unions, and embraced an overall austerity agenda while championing military interventions abroad.

Socialism by definition is a system which advocates for the nationalization of major industry in order to place the revenues in public hands and ensure equitable wages. It also promotes heavy taxation on the wealthy in order to fund robust social services.

Neither Obama, nor Clinton, nor Bernie Sanders for that matter are socialists, as none have ever advocated for nationalization of industry or promoted the restoration of the heavy taxation regiment of the New Deal era when millionaires were taxed 90% of their income after their first million.

Inhofe’s rhetoric throughout his career has played off the fears of ordinary citizens who may not be very well informed about politics.

His long tenure in power is in part a product of the failure of our education system to properly teach students about political and civic affairs and to stimulate their participation in the political process; as well as a partisan media landscape which enflames divisions rather than makes people informed.

Most of the policies which Inhofe advocates for are contrary to the interests of humanity. For years he has been the leading climate change denier in the Senate who rejects the findings of scientists that climate change is not only real but an existential threat to humanity.

In 2003, the Natural Resources Defense Council reported Inhofe had scored zero with the League of Conservation Voters since 1997 and “was the only senator to oppose Everglades restoration, and once compared the Environmental Protection Agency to the Gestapo.”

Inhofe has also championed war after war with Peace Action giving him a 6% score.

In 2003, Mr. Inhofe voted in favor of the U.S. invasion of Iraq which destroyed that country and led to the rise of ISIS; and later voted to sustain arms sales to Saudi Arabia when those arms were used to kill and maim civilians in Yemen.

All while he himself profited from stock ownership in Raytheon, a leading war profiteer.

Despite purporting to champion the troops, Inhofe disgracefully voted against bills to expand health care benefits to veterans and voted to repeal tax cuts for disabled veterans.

The AFL-CIO gave Inhofe a 9% lifetime score and zero score for 2018, implying his votes have consistently gone against the interests of working people and in favor of large financial interests.

During Inhofe’s last run for the Senate, his challenger Matt Silverstein, a financial analyst, remarkably ran to Inhofe’s right in advocating for fiscal responsibility and failed to call out Inhofe for his draconian positions and policies.

This time around, Inhofe’s challengers should learn from past mistakes and go on the attack. They need to call the dinosaur out and work to energetically mobilize young people to vote in an election that has a great deal at stake.