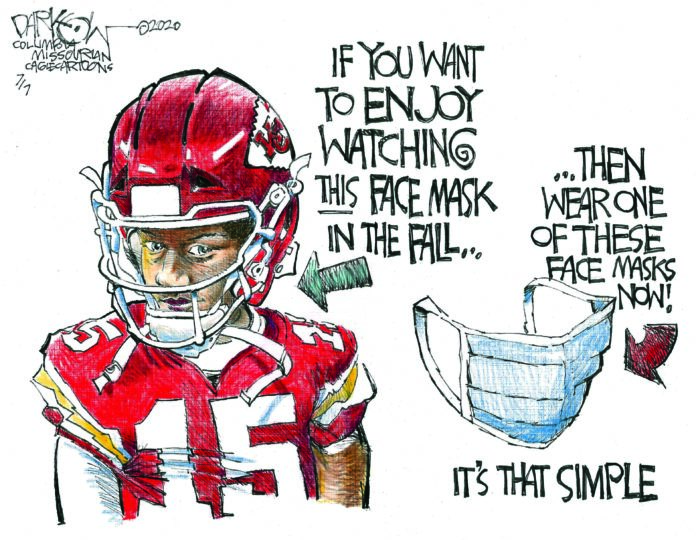 If You Want Football, Put On Your Masks

I guess one question would be whether Republican governors’ refusals to address the coronavirus epidemic seriously reflects their blind loyalty to their Infector-in-Chief – who now insists on endangering children by sending them to coronavirus incubator classrooms as well as destroying their futures through fossil fuel emissions – or their own ignorance? Of course, either answer affirms the other.

After acting as if the pandemic spikes on either coast were somehow reflective of their local situations, profit-over-public-safety GOP governors “re-opened” states that had yet to experience the first wave of COVID-19 catastrophe.

The result has proven catastrophic, with our neighbors south of the Red leading the way in record new cases every day, enough so that even a Republican governor has decided to enact some health measures. Shocking.

Two unfortunate side effects of the indifference and misinformation seeping from the White House to GOP governors’ mansions are the increase in sickness and deaths and the adamant refusal of the constituency that lapped up those lies to accept the truths now evident. Even Moscow Mitch is advocating masking up.

Of course when Putin’s presidential puppet claims that the coronavirus will “just disappear,” it’s easy for blind loyalists to paint their ignorance as a statement of political support and not total irresponsibility.

Let’s not forget either that this is the same president who called the coronavirus a political ploy by the Democrats – “their new hoax.”

Late last week, a 30-year-old in San Antonio died of COVID-19. The person, gender not disclosed, admitted to having attended a “COVID party” to “see if the virus is real,” according to NEWS4SA.

“Just before the patient died, they looked at their nurse and said ‘I think I made a mistake, I thought this was a hoax, but it’s not,'” said Dr. Jane Appleby, chief medical officer of Methodist Healthcare.

That death should rest heavily on the consciences of the president and his enablers. But they consistently demonstrate an absence of consciences or moral character.

On June 30, Lawton’s KSWO-TV’s Dallas Payeton reported just how dangerous this politicization of a health crisis has become. In an interview with Brandie Combs of the Oklahoma State Department of Health, we learned that a “pushback” to healthful behavior extends even to those who have contacted the disease.

“Some are saying ‘it’s not your business. Yes, I’m positive but I’m still going to go to work,’” Combs said, adding the obvious corollary, “and that is not beneficial to the community at all.”

The Health Department has also found that some people who tested positive had provided them with fake contact information while others are not returning phone calls to learn about their cases.

And in an unneighborly – some would say un-Oklahoma – way, other infectees refuse to provide health workers with recent contacts. Yep, some people have good friends choosing not to give them a heads up on the possibility of having come into contact with a deadly disease. I guess those sick friends – in more ways than one – figure the doctors can tell their pals later at the hospital.

On July 1, WWLS sports host Al Eschbach interviewed Oklahoma University’s stellar softball coach Patti Gasso. Along with talking about keeping her players safe and in training and the problems of recruiting amid an uncertain future, Gasso reminded listeners how the entire athletic department depends upon revenue from OU football.

But with state coronavirus cases still rising and other states [homes of scheduled opponents] spiking as well, the football season is not guaranteed – and certainly not in its usual form.

Gasso’s advice was succinct. If you want OU football this fall, wear a mask now.

I know it’s a religious dilemma for some Oklahomans: show support for your racist, misogynistic, traitorous president or support college football.

So, if you won’t wear a mask to protect yourself or granny and granddad or anybody you might come into contact with, “Wear one for the Sooners,” to re-phrase George Gipp.

Editor’s Note: On Sunday, the Oklahoma Department of Health confirmed the state’s first pediatric death from COVID-19 – a 13-year-old dependent of an active duty service member at Fort Sill. The teenager died Friday night at Comanche County Memorial Hospital in Lawton. Family members are reported to be in isolation on the post.