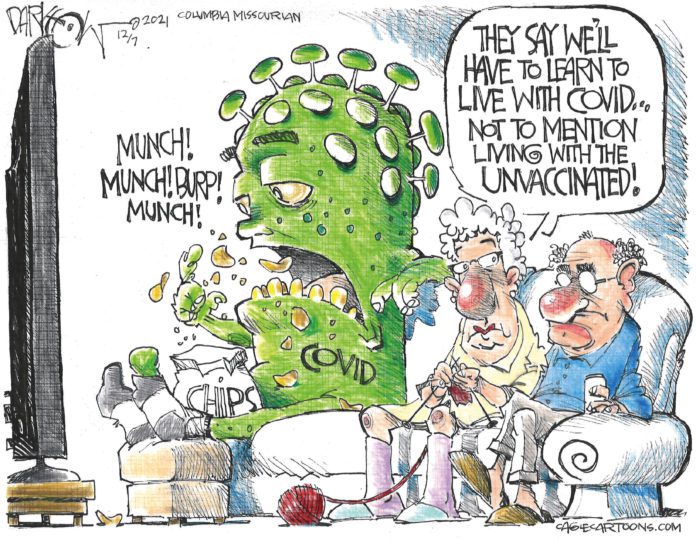 Killing Us Not Softly

I’m paraphrasing Roberta Flack’s wonderful song titled Killing Me Softly to describe the COVID-19 situation this morning. Here are a couple of numbers to think about:

In layman terms, reinforcements have arrived to replenish and/or freshen our current pandemic problems while at the same time 41% of Americans still have not taken even one shot to protect themselves and by extension the rest of us.

That means of course when you stop on the way home this evening at Walmart to grab a few things, four in 10 of your fellow shoppers are walking time bombs, the targets of an unseen but virulent and deadly disease the severity of which has now exceeded the Spanish Flu so rampant in 1918.

Yes the unvaxxed, moronic and maddening among us continue to roll the dice with their lives, their families’ lives, their co-workers and friends while the rest of us – the vaxxed who have done everything we can to survive this once in a century plague – are subjected to their idiotic behavior and worse yet, the Omicron style of this killer may be in the air by Christmas time in our 50 states.

And we don’t even know for sure how effective the current vaccines will be against it.

Meanwhile, our most ignorant and irresponsible governor ever, Clueless Kevin Stitt by name, has filed a lawsuit against the federal Department of Defense, his goal being to allow whatever number of national guardsmen and women who choose not to take the shots to do so without consequence. Over 60% of Army types have not been vaccinated while about 10% of blue-suiters also are in that most vulnerable category.

Only commanders during World War I played so loose and deadly with the lives of their people in uniform and they did so because most were ignorant of the swaths of death spit out by the newest weapon found on the battlefields of Europe … the machine gun.

Next November, many of my fellow Okies will most likely prove again that the term Oklahoma Standard is nothing to be proud of, at least when and if they cast a vote for silly, slipshod and Clueless Kevin.

And I thought former Gov. Mary Fallin was incompetent, careless and unconscionable in many of her public positions and statements. However, compared to our current commander-in-chief, the aforementioned Stitt, she looks more like Hannibal who unbelievably crossed the mountains of Italy on a herd of elephants to slay his enemies.

I just wish the current lead elephant residing in our governor’s mansion would saddle up, mount up, jump aboard or whatever one does to ride an elephant and just disappear into the sunset leaving only a trail of pachyderm poop as a memory of his disservice.

No wonder Stitt rhymes with S%&T and the rest of us are left to clean up his mess.

Speaking of a mess …