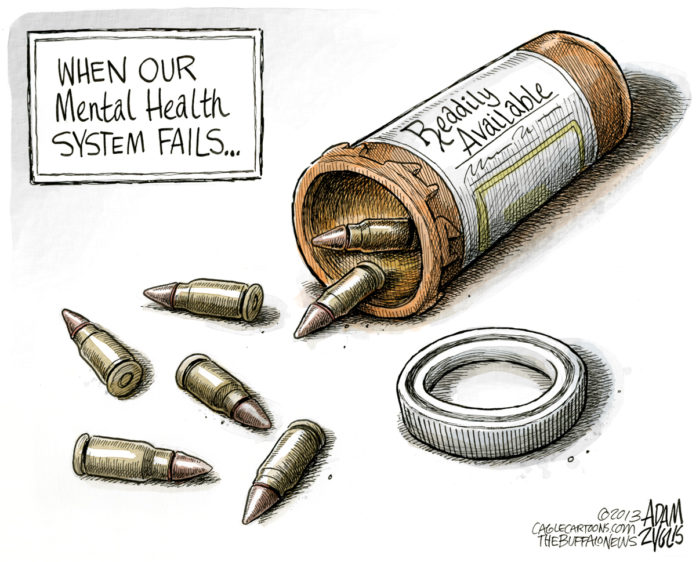 Needed: A Valium the size of a hockey puck.

That will possibly bring me down to the level of livid, but probably not. There I was, in physical therapy to prevent having to have another hip replacement, and they give a report on the shooter at the DC Navy Yard.

I knew there had to be something wrong because almost all serial killers and mass murderers are white. He was a military veteran. No surprise there – Charles Whitman, Patrick Sherrill and Tim McVeigh were, too, just to name a few. He is mentally ill which is what most serial killers and mass murderers are because, let’s face it, regardless of what the criminal definition is, I like to think I am sane and that sane people do not kill large numbers of people they do not know, except in war.

They say he was suffering from paranoia and hearing voices. I am not paranoid, but I have been hearing paranoid voices led by Sen. Ted Cruz and Wayne LaPierre, which includes all of the Tea Party, the leadership of the NRA and all of the GOP that are just paranoid and also those suffering from plain old avarice and greed.

President Obama is coming to take the guns and is buying up all the ammo we all need, at the very least, to own a semi-automatic rifle and several 100-round magazines if we are to go up against what the GOP says is the brightest and best military in the world when they invade our neighborhood.

This poor man had been told he wasn’t fit for the Navy anymore so he, at the very least, has been evaluated and if he were still alive and hadn’t invaded a military facility, he might have been lucky enough to see a mental health professional before next 4th of July – IF, and only IF, they continued to let him have VA health care. He would be much worse off if he were poor and out of the VA health care system.

Back in the ‘80s I sat for over four hours holding a toddler with over 103 degrees of temp for his young mother. That was after they had told us to come in to the clinic she had to go to. I once sat all day long in the Ben Taub ER, the day before Thanksgiving, in Houston with a woman with pneumonia because there was a line like opening day for “The Avengers.”

A few minutes ago, my husband, who is still registered GOP, got a call from U.S. Rep. Tom Cole asking him to be on a Town Hall by phone probably to discuss cutting food stamps for a few billion, so the Koch brothers won’t go broke having to pay the same percentage of taxes I do, or have to pay their employees a living wage, or give their employees benefits.

They announced on KFOR-TV in Oklahoma City that they would be voting on cutting food stamps. They sure aren’t going to be creating jobs or campaigning for a living wage. NO, they are cutting aid for college, too, and they think $7.50 an hour is too much for a kid saving for college. They want to make sure that if a poor kid wants to go to college or get health care for his/her family they will have to join the military to fight wars so the Koch brothers and their ilk can make money off of them.

The man who invaded the Navy Yard was from Fort Worth and while he would not likely get mental health care even if he had insurance, he could have driven less than 100 miles to Ardmore to a gun show and bought nearly any kind of weapon, sort of a tank, he wanted and as much ammo as he could get because there is a shortage in insanely paranoid Oklahoma and no one would have had to check his criminal or mental health history.

We keep getting hit by tornados and one of the first things I think about when looking at the destruction is: HOW MANY WEAPONS AND HOW MUCH AMMO IS IN THAT MESS FOR ANY KID TO PICK UP?