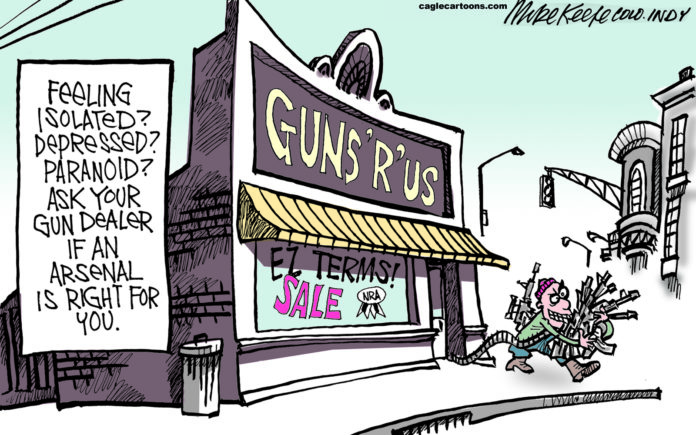 If this weren’t so tragic, if would be funny. Watching Gov. Bobby Jindal stand there and say this about the shooting at the theater in Lafayette:

“Here in Louisiana, we actually passed tougher laws a couple of years ago so that, for example, if Houser had been involuntarily committed here in Louisiana … we would have reported that to the national background check system.

Did anyone think to ask Jindal: if you are voluntarily committed in Louisiana, can you still buy a gun?

However, the idea that John Russell Houser actually needed to go to another state – to Alabama – to get a gun because of his mental history, is really laughable.

He was refused a concealed carry permit in Georgia in 2006 because of a domestic violence complaint and a previous arrest for arson in Columbus, GA.

In 2008 police went to his home because of a “mentally disturbed person” call. His wife said he had a “history of mental problems and currently is prescribed medication to take daily.” She removed all the guns from their house.

His ex-attorney said he had “always been a little off, quite obviously.” he tried to burn down the attorney’s office. According to his ex-attorney:

“His dad was the tax commissioner for many years and his brother was my stockbroker, so we agreed to hold off on prosecution as long as he got psychiatric treatment and counseling. And so when he did, I asked that the case be dismissed. But I do remember he was very intent on burning down the law office. He was some kind of religious fanatic and as I recall, he said God told him to do it.”

He had been a regular on Georgia TV and in his hometown he had flipped houses with the mayor and everyone agreed he was a little off. He had been in Lafayette for about a month.

Here is what makes Bobby Jindal’s self-serving statement so laughable. He is very careful to say that Houser couldn’t have bought a gun at a “pawn shop” in Louisiana with a history of mental illness. That is true in most states across the south.

However, Houser could have gone to any state – except New York, New Jersey, Massachusetts, Road Island, Connecticut, Oregon, Colorado, Illinois or California – and bought a gun at a gun show or from a private citizen with no questions asked.

In Oklahoma there is a gun show at the fairgrounds in Oklahoma City nearly every month, if not more than one a month.

– Karen Webb liveKs in Moore, OK and is a frequent contributor to The Oklahoma Observer