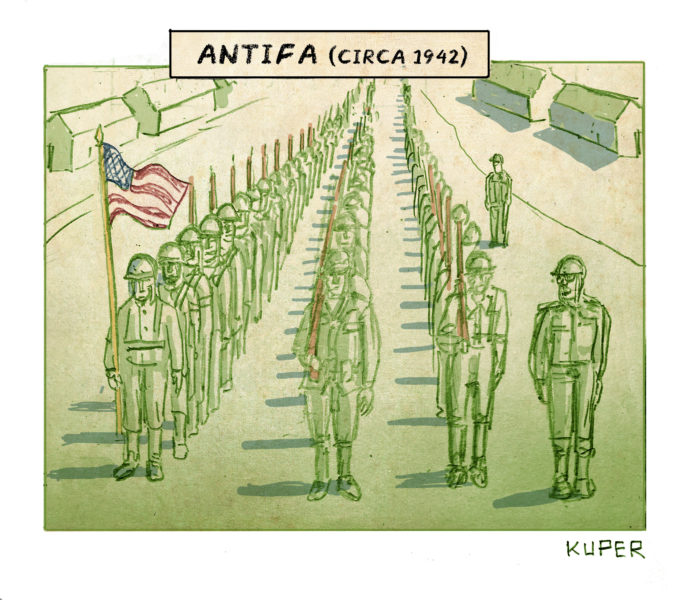 November Ballot A Vote On Fascism

In For Whom the Bell Tolls, Hemingway’s hero Robert Jordan is talking politics with one of the partisans he has enlisted to help him dynamite a bridge in order to stymie fascist troop movements during an impending Republican offensive.

Discussing the situations in Spain and the U.S., the guerrilla wonders: “But are there no fascists in your country?”

Jordan answers: “There are many who do not know they are fascists but will find out when the time comes.”

That time has come.

When the president of the United States tells a far-right group of white supremacists “Proud Boys, stand back and stand by,” the die is cast, the writing is on the wall. We have a fascist president, and those one-time Republicans standing beside him need to take stock of themselves. Mussolini’s Italians were honest enough to call themselves the National Fascist Party.

“Somebody’s got to do something about antifa and the left,” our faux führer brayed.

“Antifa” stands for anti-fascist. This entire country mobilized as anti-fascist during World War II to defeat the fascist principles of the Axis powers. Yes, there were American fascists and sympathizers – some quite prominent public figures. But most Americans recognized – and opposed – that evil when they saw it.

In an interview earlier this year with Region 7, the newspaper for Manresa, Catalonia [via Google Translate] Adam Majó, author of Thirst for Evil: Deciphering the Fascism of the 21st Century, provides “three underlying characteristics” of fascism:

“First, the belief in hierarchies: there is always someone above the other: nation, race…; second, the belief that violence is part of relationships. The basic idea of ​​fascism is the law of the strongest, its inevitability, which, once normalized, is then organized politically.”

His third characteristic is: “Populism: easy solutions to complex problems. Fascism needs the people or a part of the people. But it must be clear that not all populisms are fascist but all fascisms are populist.”

The belief in hierarchies jibes with the white supremacy at the heart of American fascism. There are OTHERS out there who just don’t quite qualify as human beings with rights equal to the fascists’. Thus, our government rips small brown children away from their parents and warehouses them in cages.

As an example of the glorification of violence, Majó cites, “the response to gender-based violence. To normalize that these things happen, that sometimes a clique escapes, is to normalize violence.” And we think of our president bragging about preying on women – and the nearly 30 women who have accused him of just that.

The populist nature of American fascism is evident in the president’s constant campaigning. He has no policies except to enrich himself and the economic elite. So, he spends his presidency on the campaign trail. He doesn’t care that his rallies risk his own followers’ health.

Majó, who currently serves as director of the Office for Civil and Political Rights of the government of Catalonia, cautions that such rallies exemplify “the first step” toward institutional fascism. “And,” he says, “it is the first thing that must be fought because words precede deeds.”

“Words precede deeds?” How about “LIBERATE MICHIGAN” and an ensuing plot to kidnap the Michigan governor for a kangaroo trial and execution?

Catalonia was one of the last Republican holdouts in the Spanish Civil War. People my age spent the first 25 years of their lives under Franco’s fascist dictatorship – after the bloody purges of those so criminal as to advocate representative government.

Fascism is not an “over there” concept to those living with its consequences – and who have seen the rise of VOX, an ultra-right party that has gained increasing power in Spain since its founding in 2013.

Majó sympathizes with its followers, whom he believes have been seduced by their own resentment of perceived wrongs and the easy fix offered by VOX.

“Fascism drinks from the pessimism of the human species,” according to Majó, “from the belief that the world will always be unjust and that the only law that people understand is that of the cane … Fascism takes advantage of our attraction to evil and connects it with the pessimistic view of the human condition.”

Gazing westward across the Atlantic, Majó observes, “I consider Trump a fascist, but not the Republican Party he represents. Nor is the United States a fascist country.”

He also disagrees with the caricature of fascist supporters as mindless zombies.

“Zombies become so in spite of themselves,” he points out, “Fascism requires the conscious acceptance of certain ideas or values.”

I am sometimes cautioned against “name-calling” and “alienating” people whose politics I question. But when we see a monarch butterfly, we call it a “monarch butterfly.” Identifying fascists by their fascism is no different.

So, what is required by every voter is to consciously and conscientiously asses the candidates’ values – and to join our patriotic ancestors in opposing fascists and those who support them.

Facebook
Twitter
Previous articleObservercast 38: Can Community Policing Come To Sheriff’s Office?
Next articleOoooh, I Love To Dance A Little Sidestep …