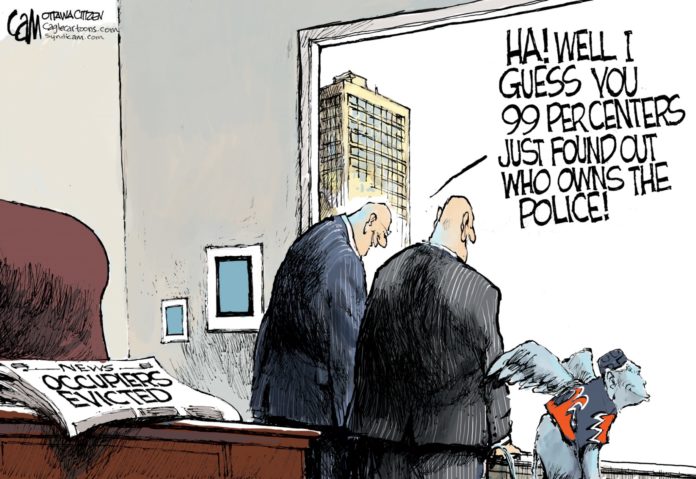 From Oakland, CA to New York City, the police, ordered by politicians, have smashed through Occupy encampments. Noted for their rigorous non-violence and orderly arrangements – tents with medical assistance, legal aid, libraries, media relations and sanitation controls – the Occupy protestors are being shoved out of their public places all over the country.

The mayor of Oakland admitted to the BBC in an interview that mayors, police and other security officials have been in contact with each other regarding how to deal with the removal of the protestors, including an 18-mayor conference call she participated in recently.

The police power is always the first response to a mobilized citizen action that refuses to go away. Even a protest against corporate greed and governmental complicity shattering the economy and millions of livelihoods, which has widespread support by the American people, faces police intervention.

How else has the plutocracy of the corporatists and the oligarchy of the politicians who serve them responded? President Obama has remained aloof, as he did earlier this year with the giant Wisconsin labor protests. California Gov. Jerry Brown has stayed out of the fray. The Congress is wallowing in its tone-deaf bubble squabbling over how to reduce the crumbs for the masses while the obscenely-bonused corporate bosses feast on the tables of corporate welfare and privilege.

Chris Hedges, the Pulitzer-prize winning war correspondent, described what entrenched illegitimacy by the power brokers has to offer besides force:

Except, one may add, for the perpetuation of their autocratic, self-enriching, dominant rule at the expense of the “99%.” Their outcry is for law and order – clear the tents from the public parks.

These are the same corporatists who constantly receive from the corporate-dominated state all kinds of waivers from health and safety regulations, from government contract rules, from fair labor standards, from taxes. And all kinds of loopholes to enhance their profits and executive pay packages.

But there are no waivers for orderly encampments non-violently advancing justice for “we the people” by spotlighting the gross inequities and cruelties imposed on tens of millions of innocent Americans.

As the destruction of the Occupy encampments proceeds, this movement will disperse into many locations and become larger and stronger. From the neighborhoods, joining with long-valiant community groups, the Occupy protestors will return by day to these public squares for their ever-more innovative demonstrations.

One protestor told Democracy Now that their expulsion from over-night stays in Zuccotti Park will show “how intuitive and ingenious a movement we have.” Already the protestors have shown their adaptive creativity. They responded to a ban on bullhorns or other amplifiers with the “human microphone,” relaying words through waves of people.

Occupy Wall Street had a 5,000-book library loaning books to residents without access to a nearby city library branch. So taken was the Washington Post’s architectural editor, Phillip Kennicott, with Occupy Washington at McPherson Square that he devoted two pages to an aerial view and report of its intricate organization calling it a “vibrant brand of urbanism.” The same is true of the other Washington, DC Occupy site at Freedom Plaza. So far City Hall and the National Park Service have left them alone.

With the coming of winter and the Occupy sites overwhelmed with the hungry and homeless poor – some urged to go there by the police – it was time for stage two. By not being somewhere, the Occupy movement will now be everywhere – in the neighborhoods, on the campuses, in churches and union halls, and marching in the streets toward the edifices of the corporatists and their political lackeys.

Furthermore, this diffusion and magnification will spread into the established institutions themselves as first a few and then more whistleblowers, dissenters and other silent patriots do their part to subordinate the corporate structures and political controllers to the sovereignty of the people. After all our Constitution’s preamble starts with “we the people,” and ends without a single mention of corporations or political parties.

Becoming stronger from violent over-reaction by the police, it will become an “Occupy America” movement with demands for long-overdue revisions of priorities and equities relating to children, workers, consumers, taxpayers, retirees and restricted voters.

The sheer volume of Americans coming into the streets with their non-violence will exhaust police resources and police resolve.

Already, the city police and local district attorney in Albany, NY refused the governor’s order to arrest and remove peaceful protestors. Why? Because said one police official “we don’t have those resources and these people were not causing trouble,” as quoted in the instant new paperback This Changes Everything.

At the University of California at Berkeley demonstration, Daniel Ellsberg said that the official enforcers’ “instinct for repression is irrepressible.” That is the dark view, predicted by Aldous Huxley’s Brave New World Revisited – a copy of which was found, ironically, in the debris of the destroyed Zuccotti Park library by Amy Goodman of Democracy Now.

But the instinct for freedom and justice is also irrepressible. Who are you betting on to prevail this time?