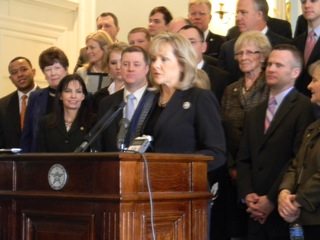 With the Republican-dominated Legislature set to descend on the state Capitol with stars in their eyes and budget knives drawn, it might be well for common citizens to pass on their own Wish List for the coming session.

Special fee on ammunition: Gov. Mary Fallin, always wanting to be seen as a gun girl, is against raising taxes – it might offend a bank, tea bag, or large “major” corporation. Fallin probably wants to find ways to increase fees. Well, how about a fee on ammunition? She promotes gun ownership – the more people who own guns, the more ammunition sold, the more fees collected.

Gun liability insurance: How about requiring liability insurance for a concealed carry permit? The state requires this on cars, most homeowners have a policy to protect against mishaps. Suppose Bubba is at the local quick shop. A masked man comes in to hold up the place. The clerk, complying with company policy, is handing over the cash. Bubba decides to save the cash and all the customers. Bubba opens fire. Bubba hits two customers as the robber flees taking the cash.

Who pays the medical bills for the wounded? They can’t pay their own bills because the conservatives and tea bag folks have wrecked health care.

The quick shop owner declines to pay because they had a policy to turn over the cash, which they did. And, Bubba is not an employee of the quick shop.

In fact, Bubba is not employed by anyone. Bubba hasn’t had a regular job in ages, lives with his parents, drives a pickup worth not much. Therefore, suing Bubba is a waste of time and the medical bills keep growing.

If Bubba had been required to have liability insurance? Perhaps some of the monetary suffering of his stray shot victims could have been eliminated.

Legalize Marijuana: With the current budget problems the numbers show that clearly open sales, control of substance and tax collection are a win. More than one law enforcement officer, in a moment of honesty, will say clearing the books of marijuana laws would be a plus.

The money saved by downgrading enforcement would be a plus. There would be a saving of police man-hours, court time, incarceration expense and saving a lot of young people from a social stigma they need not carry all their lives.

The “gateway” claim has been proven a myth time and again.

Is marijuana good for a person? Who knows? The medical community is still wrestling with that issue, “yes” seems to be winning.

Putting sale under control of state medical officers, whereby the content and quality can be controlled, cannot be a bad thing.

By maintaining the death penalty we are keeping company with some of the most heinous regimes in the world. It’s time to end this barbaric practice. We can’t afford it monetarily or morally.

Gov. Fallin could, with the stroke of a pen, save the state millions by commuting all the death penalties. Such an act would take a great deal of political and moral courage, it’s up to the governor.