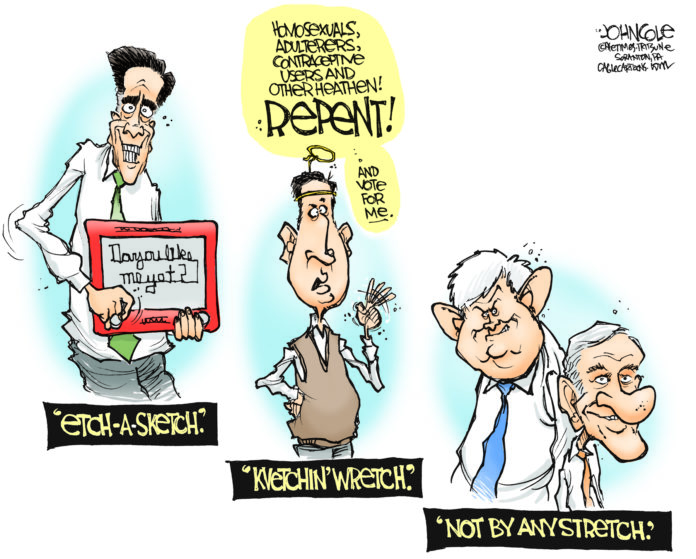 As we approach the end of the comedy tour of the Republican primaries and debates, we can sum up in only a few points the defining position of that party as they prepare for the general election.

1. Our economy has serious problems, and we’re the best to fix them, since after all we’re the ones that caused them.

2. Let’s talk about vaginas, condoms, birth control pills, and why women shouldn’t be paid the same as dudes. Women aren’t qualified to have opinions on those things, just us guys. Besides, we think burkas are sexy.

3. Too damn many Americans have health insurance, and we promise to fix that and repeal the health care reform measure that was modeled after the plan our presumptive nominee first implemented while he was a governor.

4. Truth and facts are highly overrated.

5. Let’s go ahead and bomb Iran. The current president ended one needless war, and Halliburton and big oil companies need a replacement for all those no-bid contracts that have come to an end.

6. There isn’t a single good reason to end the temporary tax cuts for billionaires when we can make up the difference by raising taxes on the middle class and poor folks.

7. Wall Street doesn’t need to be regulated. It’s just needless regulations hindering the free market system we so revere. The honor system is enough to insure they’ll always do the right things.

8. Public education is just a cleaned-up term for “indoctrination.” Private schools or home schooling is so much better.

9. Our presumptive nominee knows a lot about jobs. He killed off tens of thousands of ‘em.

10. Social Security is for sissies. Our presumption nominee earns over $20 million a year just in interest. You should do the same.

– Kenny Belford lives in Tulsa, OK and is a regular contributor to The Oklahoma Observer