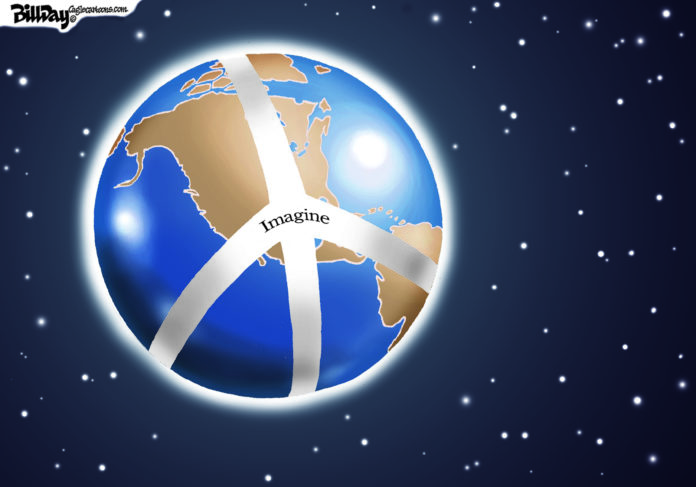 If you’ve ever played the game of Risk, you know diplomacy wins the game. You stake out your borders, make friends with whomever you share borders, and quietly grow strong.

It’s still a brutal game because the strong one, at some point, has to be a Genghis Khan and rip through the world.

We can learn a lot from Risk. Forget the brutal end; I’m talking about quietly growing strong.

We don’t need to dominate the world. In fact, we would be more secure if our leaders believed in cooperation rather than domination. People who don’t feel threatened are less likely to launch attacks, terrorist or otherwise.

There is no shame in sharing the world. Greed and the desire for power are the enemies, not our fellow humans. Yes, there are despots and madmen in power. Yes, there are evil people who have determined that their way is the only way, and some of those are in our own country. But there are more of us, humans who want to work together and save the world for us all, than there are of them.

This country’s leaders set us on the path of destruction when they begin naming enemies. We make our country less safe when we side with one strong man against his own countrymen. We make our country a target when we dismiss a whole group of people because of what a handful of their fellows have done.

There are good people everywhere, including Palestinian families who only want peace and their own country, Israeli citizens who cry out against occupation, and Iranians who don’t understand the mess their leaders and ours have gotten them into.

There are people of every faith and every culture who believe that violence is a sin and that we each have the right to our own beliefs and to our own small piece of this Earth and her resources.

Terrorism is a nebulous term. When we cite terrorists as enemies we are making them less than human. They are men and women with grievances, both real and imagined, grievances we must try to understand. We can’t begin to have peace in this world until we can sit at a table and talk honestly. Friendship will make our borders more secure than scalable fences and bomb-dropping drones possibly can.

Two wars have nearly bankrupted our country. Military installations around the world get more of our assets than our schoolchildren get. Until we work at the hard task of peace, our economy will not right itself.

War won’t secure us. Peace and cooperation can.