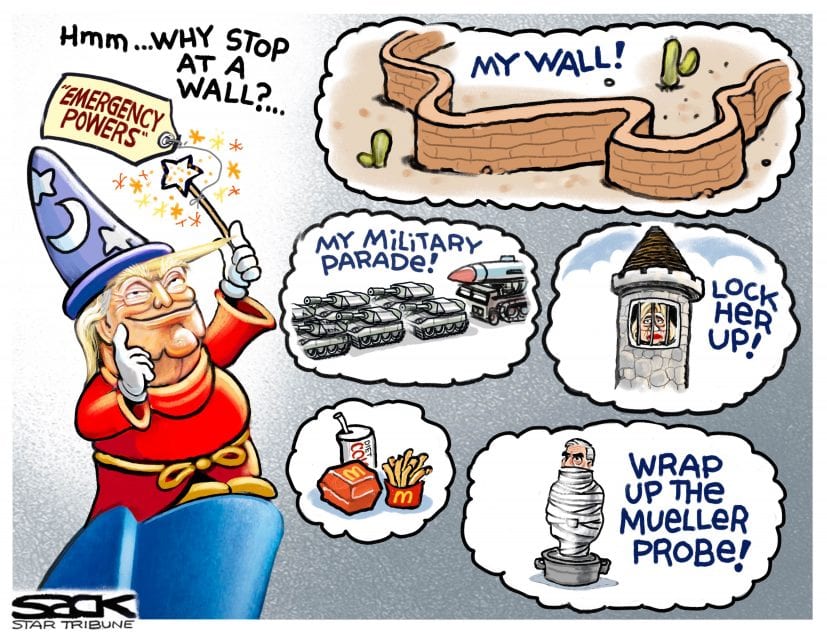 Two things are clearly of great concern to our current president at the moment – low approval ratings and expanding investigations. Over the next year, Donald Trump will become increasingly desperate to increase his ratings and stop the investigations, and he will need some sort of national crisis in order to accomplish both.

Trump’s manufactured “border crisis” is an attempt to create an excuse to declare a national state of emergency in order to shore up his base, expand his powers, and call for an end to the multiple investigations that are currently being conducted.

Thus far, his attempt at making the case that we are experiencing a border crisis has been unconvincing to all but his unwavering base, but whether it be a “national emergency” of a “border crisis,” a war with Venezuela, or some unforeseen terrorism event, Trump has been intently looking for a way to expand his power in response to a threat whether real, manufactured, or completely fake.

When Trump makes his expansion of presidential powers move, we will need to do more than simply tweet our opposition. This would be a moment that would require relentless and massive opposition, for if Trump is allowed to get away with declaring a national state of emergency, we will likely be under such a state of emergency with expanded presidential powers until the end of his presidency.

The use of national emergencies is one of the most tried and true methods used by authoritarian leaders to gain, maintain, and expand power. Once given such expanded powers, authoritarian leaders do everything they can to keep them. They do not simply give the powers back, and they usually figure out ways to take more and more.

If you think our country simply will not allow any president to take such expanded powers, think again.

We have already allowed him to ban persons’ travel based on religious discrimination, separate refugee children from their parents and put them in detention centers, shut down our government for the longest period of time in history putting families in financial distress, and meet alone with President Putin twice without any American senior officials present.

Trump keeps crossing what should be red lines with virtually no consequences. We have given him very little reason not to continue doing so.