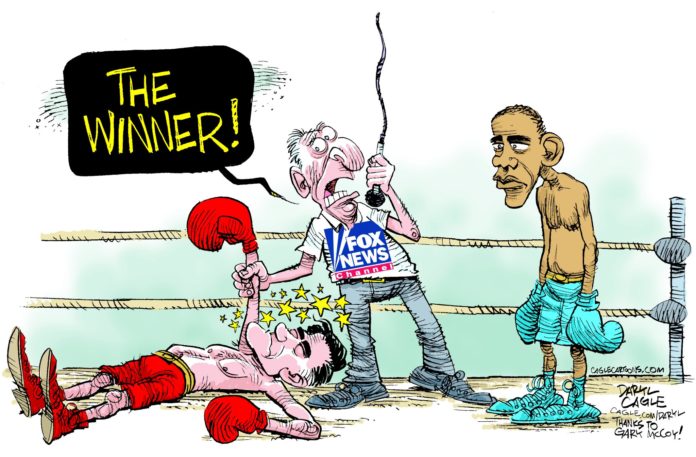 Here we go into the last weeks of the 2012 election cycle with both major parties embroiled in a massive propaganda war while third and fourth parties scream about being shut out of the debate process. It looks like this will be a billion dollar-plus cycle with money pouring this way and that to keep the ads coming and the candidates moving around the country trying to scratch out the necessary votes to carry them to what their supporters will call a victory.

Somehow, though, the sense of winning in this year of our discontent [or is it just another year of discontent] doesn’t carry a warmth or a fluttering heartbeat. It feels more like a huge rock being lifted off one’s chest: At last. The carping, bleating, berating, lying, posturing and hatefulness will soon be over. Yes, I said hate.

The vehemence with which the major political parties have attacked opponents is astounding in its unbridled passion. From where did this passion arise?

All one has to do is listen/watch Fox News or listen to Clear Channel radio to know the answer. Even the trash-talking against Bill Clinton was mild compared to the wall-to-wall progressive assassinations going on today. Progressives are obliged to fight back.

You might recall that George W. Bush and his minions were handing over a trillion dollars to the drug companies, borrowing another trillion dollars, or so, from the Chinese to fight two wars while cutting trillions in taxes for those most capable of paying them. Remember?

Do you remember the big deal about deregulating banks and altering tax laws for corporate profiteering? Well, the Republicans decided to recapitulate the same rules that caused the economic collapse of 1929. Guess what? It “worked” again with the crash of ’09.

The corporations and the super rich have now legally stashed trillions more of our dollars in foreign banks because they paid for rule changes through extensive lobbying. But these folks still have enough pocket change to pay for $50,000 per plate “fundraisers” as well as coughing up still more campaign money – as much as they like – because the Supreme Court said it was OK and that money was speech.

So, here we are with the presidential race in a dead heat. According to polls, half the voters say it’s OK to keep letting the rich people hide their money and to pay even fewer taxes. The other half says it’s not OK for rich people to avoid paying their fair share, or for corporations to hide their money from taxation.

One half thinks that it’s OK to cut benefits from people who’ve already had them promised, while the other half thinks it’s OK to keep our promises and are willing to pay for not only universal health care, but also for dignity in retirement.

I wonder if peace, quiet and remembering how to be friends will come back after Nov. 6