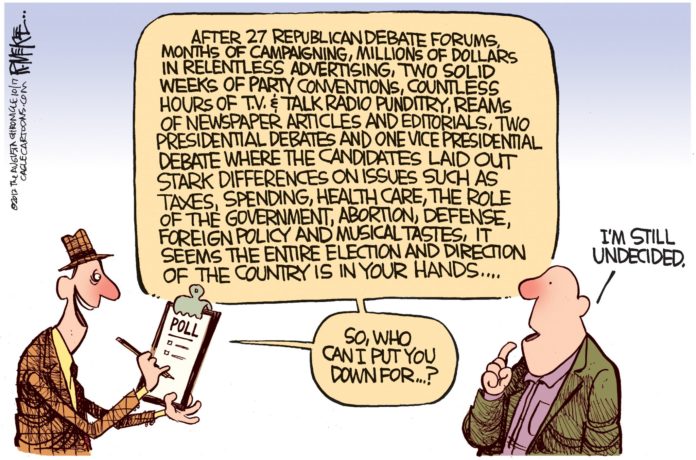 How can there possibly still be undecided voters? Haven’t the candidates hashed, rehashed, and changed their positions on the issues that matter to them, if not to us? What else is there to say?

Maybe undecideds aren’t sure what matters to them. A better explanation is that there are far fewer undecided voters out there than news outlets want us to believe. After all, they want to keep up the suspense. I don’t think that’s going to be a problem.

So long as Romney keeps his Social-Security-privatizing running mate out of the public eye and so long as we don’t hear him reverse his reversed positions after he has said in public what centrists want to hear, this race may be a gut churner.

What they may not have heard was his explanation a day or two later that what he said only applied to people who were already insured, which makes sense, since he wants to get rid of the individual mandate. Only if everyone is covered will it be affordable for insurance companies to cover pre-existing conditions.

If ObamaCare is repealed, those of us with pre-existing conditions who don’t have company insurance can kiss our coverage goodbye.

This prevarication is a good reason why I’m on President Obama’s side. If ObamaCare is repealed, I expect I’ll die younger than I should simply because of my pre-existing condition. I had the sheer bad luck to have polio at age four. Despite the fact that I’ve worked, and worked hard, most of my life, I’m a liability in Go. Romney’s eyes.

No way I’m undecided. I’m thinking there are similar issues for all of us.

For a couple in Florida, Pentecostals like my family, the deciding factors for choosing Gov. Romney were abortion and gay marriage issues. These trumped her need for Medicaid and his use of extended unemployment benefits.

I believe we all have deciding factors. I believe, too, that if you haven’t decided, you haven’t been reading the small print or listening to the whispered asides.

Two more weeks. It may be a knuckle biter. It’s what those who make money from advertising want us to think anyway.